Stephen Mokoka back to his brilliant best

The local long distance runner delivers a fine performance in the Great Manchester Run in England. 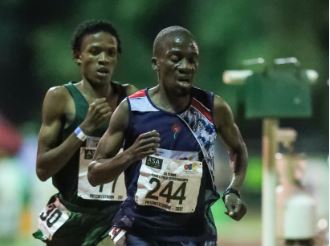 Stephen Mokoka was back to his best on Sunday, hanging on in a world-class battle to take third place at the Great Manchester Run 10km contest in England.

Having set the national record of 27:38 at the annual road race two years ago, Mokoka returned with a bang, making a statement with another superb performance.

Despite struggling to find his best form on the domestic road and track circuits this season, the African 10 000m champion proved he was still a force at international level by making a break alongside American athletes Dathan Ritzenhein and Bernard Lagat at the 7km mark.

While he held on until the finishing straight, however, Mokoka was unable to produce a challenge in a late sprint for the line, completing the race in 28:22 to take the bottom spot on the podium.

Ritzenhein, the bronze medallist at the 2009 World Half-Marathon Championships, won the race in 28:06, and Kenyan-born countryman Lagat, a former 1 500m and 5 000m world champion on the track, took second position in 28:12.