The discus thrower's initial inclusion and then omission is just another example of ASA's poor team selection for the World Champs. 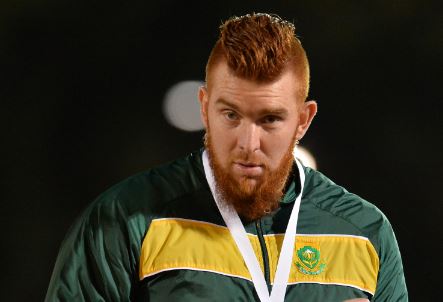 Victor Hogan was initially suspended for two years for the use of banned substance. Photo: Roger Sedres/Gallo Images.

Discus thrower Victor Hogan was removed from the national team on Monday for the IAAF World Championships in London starting next week.

According to a statement released by Athletics South Africa (ASA), the International Association of Athletics Federations had confirmed that Hogan had not met the qualifying criteria.

While he ‘qualified’ by winning the African title in Durban last year, that performance had been produced after he tested positive for the banned substance methylhexaneamine and his name had since been scratched from the results.

The 27-year-old giant was suspended for two years but he had the sanction reduced on appeal.

“All performances achieved in that (suspension period) are not recognised and have been scrapped,” ASA confirmed in a statement.

Though Hogan had since returned to competition, the former World Championships finalist had not achieved the 65.00-metre international qualifying standard.

He was nonetheless included in the controversial final team announced last week, despite the omission of 15 other athletes who had achieved the B-standard qualifying criteria.

The national team for the biennial showpiece was reduced to 23 athletes (17 men and six women) though ASA had not yet confirmed whether any athletes had been added to the squad following multiple appeals.