Both him and Akani Simbine progress to the semis of the 200m but SA is denied a third participant after teenager Munyai gets disqualified. 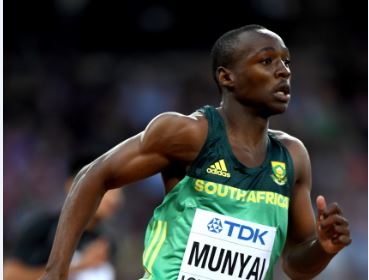 Ahead of Caster Semenya’s attempt at a World Championships medal in the 1 500m race in London on Monday night, the SA team enjoyed a superb session in the heats of two disciplines.

Here are some key moments, as they played out.

Wayde van Niekerk opened his account in the half-lap sprint with a dominant performance in his heat.

He pushed hard around the bend before hitting the brakes down the home straight, cruising to victory in 20.16 seconds.

Isaac Makwala of Botswana, a major threat to Van Niekerk’s attempt at a 200m/400m double, pulls out of his heat.

With Jamaican Usain Bolt giving the event a miss, and Canada’s Andre de Grasse injured, the door opens even further for the South African.

Shaking off a niggling hip injury, Akani Simbine coasted through his heat, taking second place in 20.26.

He joins Van Niekerk in the start lists for Wednesday’s semifinals.

Closing out an action-packed opening round in the half-lap dash, teenager Clarence Munyai ended third in his heat in 20.19 and looks to have qualified for the penultimate round, but he is delivered a crushing blow to his campaign after being disqualified for a lane violation.

No semifinal for the sprint prodigy.

African champion Wenda Nel looks comfortable throughout her heat, coasting across the line in second place in 55.47.

She progresses to the semifinals, to be held on Tuesday evening.