The sprinting sensation says he was 'upset' over allegations that the IAAF had given him preferential treatment to boost his popularity. 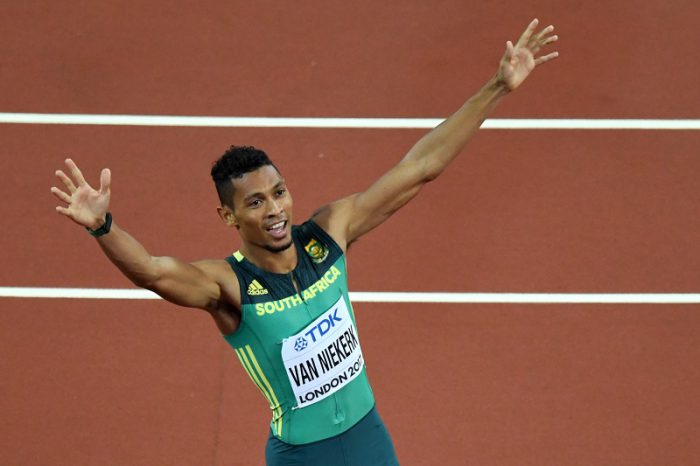 Wayde van Niekerk is disappointed over the criticism he received in London. Photo: Antonin Thuillier/AFP.

International sprint sensation Wayde van Niekerk has hit back at his detractors, after being called out this week on the sidelines of a debate which evolved into a bizarre conspiracy theory at the IAAF World Championships in London.

Though Van Niekerk narrowly missed out on double gold, retaining his 400m title and taking the silver medal in the 200m final, he was implicated in a claim made by American legend Michael Johnson, the only man to lift both crowns.

After his opponent Isaac Makwala of Botswana was forced to withdraw from the 400m final for health reasons, apparently after a virus spread in his team’s hotel, Johnson suggested the IAAF had blocked the in-form athlete from taking part in order to boost Van Niekerk’s popularity.

Makwala, who was allowed back into the 200m event after missing the heats (by achieving the required time in a solo time trial) was later alleged to have supported Johnson’s theory, though he went on to settle for sixth position in the half-lap contest.

“It really did upset me a bit, especially with the amount of respect I’ve shown each and every one of my competitors, especially Makwala,” Van Niekerk said.

Van Niekerk, who won the 400m world title for the first time in Beijing two years ago and broke Johnson’s world record at last season’s Rio Olympics, felt he had earned more respect from his opponents and his predecessors.

“If I was an overnight success, and this was my first gold medal, I could have accepted a statement like that, but I’ve been putting out great performances for the last few years now, including the double here,” he said.

“I definitely deserve way more respect from my competitors.”

Moving forward, Van Niekerk suggested he would not attempt the 200m/400m double again at a major international championship.

“I’d love to have the 400m as an individual event, so I’d like to improve my world record again, and the only doubles I think I would consider now is the 100m and 200m,” he said.

Though he was considering the short-sprint double at the 2018 Commonwealth Games in Gold Coast, he had not yet made a decision.

“I’d love to do the 100m and 200m at the Commonwealth Games next year, but obviously I’m going to have to do some 400m races as well at the Diamond Leagues and World Challenges,” he said.