Look out for these contenders for the national 10km championship

Despite the absence of Stephen Mokoka, there's no shortage of exciting candidates eager to shine in Mbombela on Saturday. 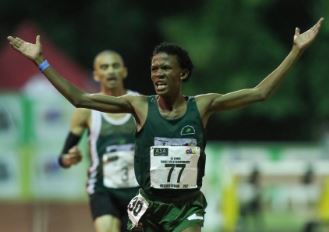 Though in-form athlete Stephen Mokoka is skipping the race to focus on next week’s Shanghai Marathon, and some of the country’s top women are missing from the provincial entry lists, strong fields will line up in the chase for national titles at the SA 10km Championships in Mbombela on Saturday.

Here are some of the top contenders.

Having consistently held his own against quality fields in recent months, Mosiako lines up among the favourites for the national crown. He won the SA 5 000m title in April and has put up a fight against the local heavyweights on the domestic 10km circuit in the second half of the year, and he will be eager to upset the big guns once again.

The defending champion will look to extend a lengthy run of late season form. After clocking 2:12:49 on his marathon debut in Cape Town in September, Gelant finished fifth at the CitySurfRun in Durban three weeks later, clocking 29:11, and he grabbed third spot at the high-altitude Tembisa Street Mile 10km race last week in 30:02. With Gelant’s experience, if he toes the line, he will always be in contention.

One of South Africa’s most underrated distance runners, Ngxazozo has become the perennial bridesmaid, often taking the back seat to some of his more esteemed compatriots. He earned the bronze medal at the national 10km championships last year, and he will aim to prove he can not only mix it with the best, but beat them too.

Perhaps better known for her exploits on other surfaces, taking the SA 10 000m and cross country titles this season, Xaba will be eager to prove she can turn it up on the road as well. Always lurking behind the pack on the local circuit, she will be hoping for a breakthrough performance on the tar.

A former national 10km champion, Conrad has been consistent at the highest domestic level in recent years, and after making a brief return to the track, she has regained her best form on the road. While she has struggled to step up to the marathon distance, Conrad is more than capable over 10km and will be confident of her chances.

No other South African distance runner has made more of an impact this year. The SA 5 000m champion made a stunning move to the road earlier this season, capturing the lucrative Spar Women’s Grand Prix series title. Though she has had a long 2017 campaign, Molotsane should be up for one more fight.