Van Zyl slipped off the pace when she took two toilet breaks, as Makhanya stormed clear in the second half. 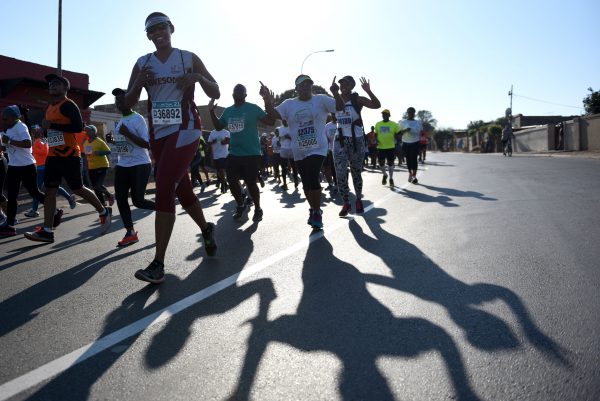 Participants of the Old Mutual Soweto Marathon run through the streets of Soweto, 5 November 2017. Tsepo Mathibelle of Lesotho won the men's race in 2:19:39 and Irvette van Zyl takes her first Soweto Marathon victory in 2:41:04. She is the first South African woman to win the race in eight years

Irvette van Zyl chased down Mapaseka Makhanya to lead the local charge in the women’s race, while Tsepo Mathibelle of Lesotho pounced late in the men’s contest, with both athletes securing well-judged victories at the Soweto Marathon on Sunday.

Competing in her second marathon in seven weeks, after finishing ninth in 2:36:46 at the Cape Town Marathon in September, Van Zyl slipped off the pace when she took two toilet breaks, as Makhanya stormed clear in the second half.

She stayed in touch, however, and struck in the latter stages, reeling in her tiring compatriot over the rolling hills through the historical township.

Van Zyl completed the 42.2km race in 2:41:06, breaking a lengthy drought by becoming the first South African woman to win the annual race since Rene Kalmer in 2009.

“I didn’t think at the start of the race I was going to win it because I felt a bit bad… and then I thought I had lost the race completely because if you make a pit stop you lose time and rhythm,” Van Zyl said. “So I’m just happy to have kept it going and maintained my stride.” Racing over the marathon distance in her home town for the first time, Makhanya held on to finish second in 2:44:37.

“When we reached 32km it got so lonely and very tough, but seeing my mom on the route made it worth it,” Makhanya said. “She has never watched me running a marathon, so today was more than amazing.”

Mathibelle, meanwhile, delivered an impressive tactical display, also taking the lead late in the race to win in 2:19:41.

Sintayehu Legese of Ethiopia, who was aiming for his fourth straight victory, settled for second position in 2:20:56, and Ntsindiso Mphakathi was the first SA man across the line, ending third overall in 2:21:23.