The national netball team just can't quite seem to take the final leaps to big victories. 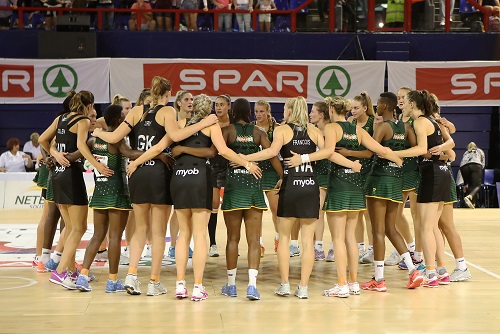 The teams huddle after the Netball Quad Series match between South Africa and New Zealand at Ellis Park Arena on January 25, 2018 in Johannesburg, South Africa. (Photo by Reg Caldecott/Gallo Images)

Despite putting up a gutsy fight once again, the national netball team were handed another narrow defeat by global giants New Zealand in their Quad Series match at Ellis Park on Thursday night.

Going in search of their first win over the Silver Ferns in nearly 23 years, after giving world champions Australia a scare last week, the Proteas stayed within touching distance throughout the match.

They were unable to find an edge over their fancied opponents, however, ultimately falling in a 51-46 loss.

It was their closest margin of defeat against New Zealand since the 1995 World Cup.

Trailing by seven points in the second quarter, South Africa pulled it back to a 25-21 deficit at the half-time break.

Working hard in the third period, they managed to reduce the gap to just two points, but the tourists soon regained the advantage and held a 39-34 lead heading into the last quarter.

Maintaining their intensity, the Silver Ferns retained control in the final stanza, holding their hosts at arm’s length to bag the win.

The Proteas, who beat England late last year for their only Quad Series victory thus far, will target another win over the Roses in their final match of the four-nation campaign on Sunday.