Allister was only part of a bigger problem, say Springbok legends

But one of the now ex-Bok coach's predecessors, Peter de Villiers, insists he warned him about taking the job. 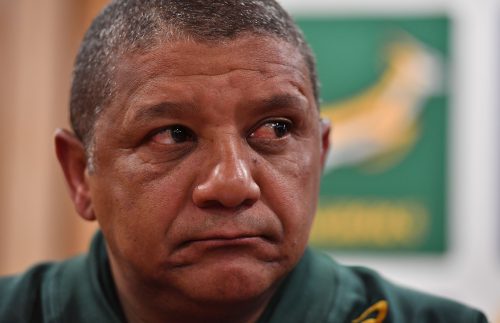 Following months of rumours and uncertainty regarding Coetzee’s position, SA Rugby announced on Friday that it had reached an agreement with the embattled coach to part ways with immediate effect.

Coetzee achieved a dismal 44% winning rate during his two turbulent seasons in charge.

“I have always held Springbok rugby dear to my heart and will continue to do so. For that reason I think now is the time the team and me strike out in new directions,” Coetzee was quoted as saying in press release.

This was in stark contrast to the tone in a strongly worded 19-page legal letter sent to his former employers earlier this week, in which he insisted he was set up to fail.

“Our rugby is not merely a one-problem situation,” Du Preez who packed down in 38 Tests for Boks, said.

“Allister might be part of the problem bit it’s never about just one individual.

“If he was the only problem then all well and good. But he isn’t. We are sitting with 300 players overseas and if we can get just 40% of them back it will benefit Bok rugby immensely. It sends out the wrong message to our young players,” added the outspoken Du Preez.

He also has some words of advice for SA Rugby’s director of rugby Rassie Erasmus, who is heavily favoured to take over the Springbok coaching reins.

According to insiders, Erasmus will call the shots full-time and even if SA Rugby fills Coetzee’s vacancy, his replacement will be merely a “ceremonial figure”.

At one stage this was rumoured to be Kings coach Deon Davids.

“If Rassie Erasmus gets the job it’s fine, but he will encounter the same obstacles when it comes to executive and boardroom decisions,” cautioned Du Preez.

Another former Bok lock Mark Andrews went a step further by saying SA Rugby and Coetzee are probably both to blame.

“It’s sad to see this happening, but Allister must probably ask himself whether he possessed the skills set to coach the national team at this level and whether he should have accepted the position,” he said.

“But then SA Rugby probably didn’t provide the proper tools for Allister to have done the job and they should ask themselves whether it was the correct decision at the time to have appointed him in the first place two years ago.

“In the end it’s about serving Bok rugby and making the correct calls on who should take care of the national side.”

Former Springbok coach Peter de Villiers, who himself attracted his fair share of controversy during his tenure from 2008 to 2011, said he warned Coetzee about taking the job.

“He was forced out of his job, because people didn’t give him the support he needed so much to be successful. It happened to me and I told him that it would happen to him too,” De Villiers told EWN.

The rugby department of SA Rugby will manage the responsibilities of the Springbok coach, until the national team’s coaching and management group for 2018 is confirmed later this month, with the confirmation of the Springbok management set-up due to be completed before the end of February.

The Boks – who have slumped to No 6 in the world rankings – next take on No 2 England in a three-Test series at home in June.