Can South Africa dream of another Olympic marathon winner?

If you believe his coach, Desmond Mokgobu is destined for a medal at the 2020 Olympics. 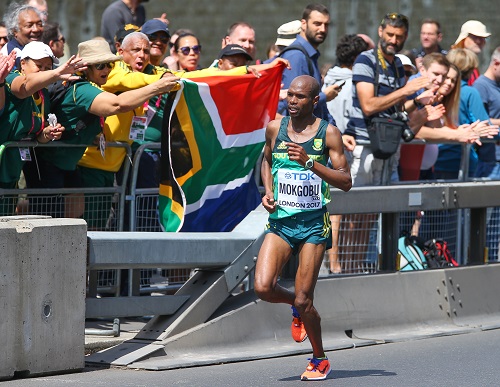 He might not possess the speed of some of his opponents, but Desmond Mokgobu has the ability to become the first South African in more than two decades to win the Olympic marathon, according to his coach Hendrick Ramaala.

Mokgobu won the Beppu-Oita Marathon in Japan earlier this month in 2:09:31, climbing to 12th place in the all-time SA rankings over the classic distance.

And while he believed he could go a couple of minutes quicker, Ramaala said the 29-year-old athlete was more of a racer than a time trial specialist.

With the correct approach, he was confident Mokgobu could produce a challenge for the top spot on the podium at the 2020 Tokyo Games, in the same way Thugwane stormed to a stunning victory at the 1996 Atlanta Games by outclassing the speed merchants.

Having improved his career best every year since winning the SA title in 2014, Mokgobu has displayed tremendous potential, particularly in races which cater for his tenacity by offering undulating courses and relatively tough conditions.

He settled for 41st place in the marathon at the 2015 World Championships in Beijing and improved to 21st position at the global championships in London last season, and with more experience under his belt, Ramaala felt he could emulate Thugwane and 1912 gold medallist Ken McCarthur as the only two SA athletes to lift the Olympic 42.2km crown.

“I think he can cause some big upsets,” said Ramaala, a multiple national record holder and former New York Marathon winner.

“He has a fighting spirit. He has the ingredients.

“He’s a racer, in the same mould as Josia. Even in training… he likes to fight.”

Mokgobu was equally confident of making a podium charge at the Tokyo Games.

“My plan now is to run at the Olympics,” he said.

“I’m still young enough for a marathon runner, so in two years’ time, I want to be there.”