The long jumper produces a superb performance in what is a clear statement of intent before the Commonwealth Games. 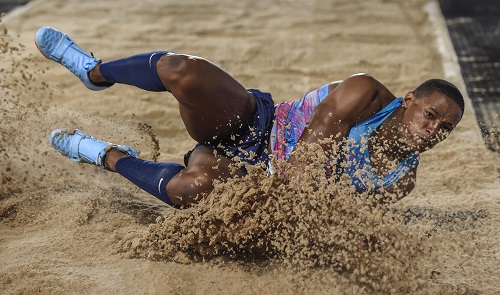 While they had to battle a choppy wind and a technical blunder, the country’s elite athletes delivered once again at the third and final leg of the Athletix Grand Prix series in Paarl on Thursday night.

Spectators may have been disappointed by the faulty times which flashed up on the stadium clock but a number of solid performances were produced.

These were some of the highlights.

Stealing the show in front of his home crowd at Dal Josaphat Stadium, Samaai opened with a massive 8.39m leap. He went on to clear 8.12m or further with all five of his legal attempts, securing a convincing victory and sending a warning to his opponents ahead of next month’s Commonwealth Games

After causing an upset by winning the national title last week, Adams proved he was no one-hit wonder by snatching another big scalp. He stormed across the line in 20.01, edging out former World Championships bronze medallist Anaso Jobodwana by 0.06

Though the windy conditions put an end to any talk of a national record attempt, Semenya went out hard and led from the gun. Dom Scott-Efurd held on for as long as she could, but Semenya broke away on the last lap to win by more than six seconds in 4:02.50

Having battled with injuries over the last few years, after his cracking 2014 season which included Commonwealth Games and Continental Cup titles, Fredericks showed he was getting back to his best. Looking strong down the home straight, he drew clear of a quality field to win in 49.68

The stocky sprinter had the crowd on their feet after ‘9.85’ flashed on the clock, which would have been a national record. While his official time was adjusted to 10.08, however, Simbine was delighted with his performance after withdrawing from the SA Championships last week with a hamstring niggle.