The Lions lost too much ball in contact and already missed 14 tackles to seven in the first 40 minutes. 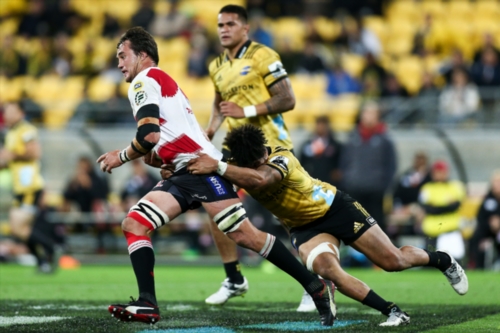 Franco Mostert of the Lions is tackled by Ardie Savea of the Hurricanes during the round 12 Super Rugby match between the Hurricanes and the Lions at Westpac Stadium on May 5, 2018 in Wellington, New Zealand. (Photo by Hagen Hopkins/Getty Images)

Reeling from losing their star hooker Malcolm Marx early in the game the Lions crushed to a second straight loss of their Super Rugby away leg when they were well beaten 28-19 by the Hurricanes in Wellington’s Westpac Stadium in extreme windy conditions on Saturday.

Marx left the field as early as the eighth minute with a hamstring injury which resulted in the Lions struggling in the lineouts with replacement Robbie Coetzee having being well short of proper game time.

Despite hammering the Canes in the scrums, local leftwing Ben Lam helped himself to a hattrick as the Canes outscored the Lions by four tries to three, scoring their eighth win in nine matches, while it was the Lions’ fifth loss in 11 starts.

A breakaway try by Lions replacement wing Sylvian Mahuza in the 75th minute gave the Lions scoreline more respectability after they were thoroughly outplayed in the greater context of the game.

While the Lions showed great improvement from the Reds game and had good tenacity on the ground winning 12 turnovers in the first half to six, they lost too much ball in contact and already missed 14 tackles to seven in the first 40 minutes.

Flank Marnus Schoeman continued his try-scoring spree by scoring his fourth in the last three matches in the 57th minute and the Lions second, but trailing 28-12 the Lions were already staring down the barrel.

Most valuable player of the Match

Hurricanes leftwing Ben Lam has been a sensation for his team the entire competition long and scored three more tries in this game to push his tally up to 12 this year and the competition’s leading try-scorer and the Lions struggled to contain the big man whenever he was put in possession.

Key Moments of the match

*After showing great intensity initially on defence a missed tackle from Lions wing Ruan Combrinck on Hurricanes leftwing Ben Lam in the eight minute gave the big leftwing a free run to the goalline for a 7-0 lead.

*Another Combrinck missed tackle on Hurricanes centre Matt Proctor in the 25th minute saw the midfielder ripping open the Lions defence to offload to flying flank Ardie Savea who ran a great supporting line and secured a 14-0 lead.

*A strong scrum by the Lions on the stroke of halftime saw No 8 Kwagga Smith break away and when he was stopped just short, the ball was recycled and scrumhalf Nic Groom dummied cleverly to dive over close to the uprights to trail only 14-7 at the break.

*Lam’s second and third tries in the 46th and 54th minutes saw the Canes stretching their lead to 28-7 and with Lam’s second try it was Lions fullback Andries Coetzee who shot out of the line but missed the tackle which basically summed up the Lions’ day.