I only do this for love, says Comrades ace Bongmusa

The third-time men's champion gallops to his win after suffered a personal tragedy while women's winner Ann Ashworth executes her 'plan' perfectly. 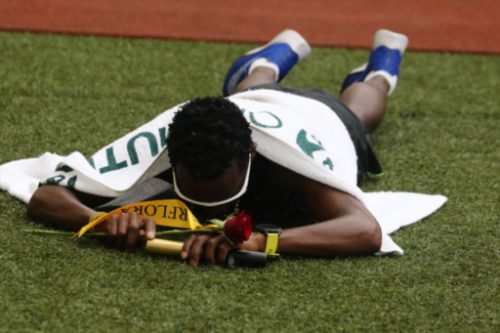 Overcome by emotion, Bongmusa Mthembu on Sunday said he was driven by passion rather than incentives, after he outclassed a quality field by romping to a commanding victory at the Comrades Marathon.

Having marshalled the main group for most of the race, controlling the pace at the front of the pack, Mthembu surged down Cowies Hill and broke clear of his last remaining opposition with less than 20km remaining in the 90.1km battle.

Maintaining his momentum to the finish, he gradually extended his advantage to cross the line in five hours, 26 minutes, 34 seconds (5:26:34).

He earned his third victory in the annual contest, after winning in 2014 and 2016, and his second on the ‘down’ run between Pietermaritzburg and Durban.

Producing a storming finish, he completed the race more than eight minutes clear of second-placed compatriot Joseph Mphuthi, who clocked 5:35:09.

Though he earned over R600 000 in prize money, Mthembu said financial incentives had not driven him to his treble triumph.

“To win this race three times is not easy. You have to run a lot of kilometres,” said Mthembu, whose preparation was disrupted by the death of training partner Sphiwe Ndlela just three months before the race.

“But I’m lucky because I don’t do this for anything else but love.”

Ann Ashworth, meanwhile, broke away on the stretch through Pinetown, shortly after the brutal elevation drop at Fields Hill with a little more than 20km to go in the women’s race. 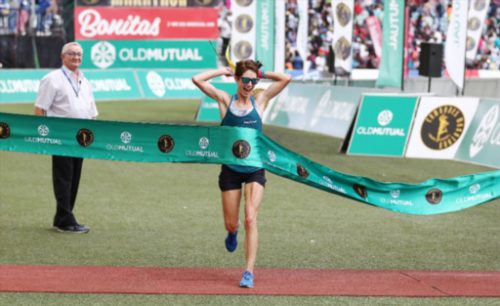 Bouncing back after withdrawing injured during last year’s ‘up’ run, she held on to secure her maiden title in 6:10:04.

“I don’t think anyone is more surprised than me… but I followed the plan and did exactly what I was supposed to do,” said Ashworth, an advocate who works full-time.