Novak Djokovic simply has too much class for South Africa's tennis hero as he claims a straight-set victory. 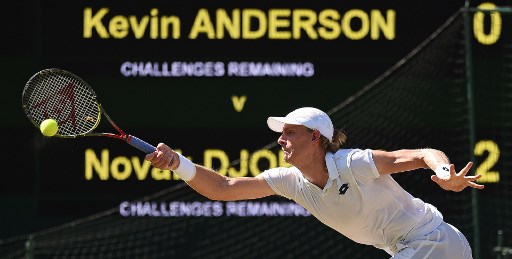 South Africa's Kevin Anderson returns to Serbia's Novak Djokovic in their men's singles final match on the thirteenth day of the 2018 Wimbledon Championships at The All England Lawn Tennis Club in Wimbledon, southwest London, on July 15, 2018. / AFP PHOTO / Oli SCARFF / RESTRICTED TO EDITORIAL USE

Kevin Anderson fell at the final hurdle on Sunday after delivering a couple of gutsy performances to reach the title decider at the Wimbledon Championships in London.

Having progressed to the second Grand Slam final of his career, the South African player’s fatigue was evident as he battled to get going against Serbian star Novak Djokovic.

Unable to put up a fight in the early stages of the match, he produced a challenge in the third set but was ultimately handed a convincing defeat, with Djokovic picking up a 6-2 6-2 7-6 victory to lift the title for the fourth time.

“In the first two sets Novak beat up on me pretty bad, but for the whole fortnight I really worked hard,” Anderson said.

“I came within maybe a point or two of pushing it to the fourth set and it would have been great to play longer here, but obviously playing against Novak isn’t easy. He’s obviously a true champion of our sport. Congratulations to him and his whole team.”

Earlier in the week, the big-serving No 8 seed had defeated eight-time Wimbledon champion Roger Federer of Switzerland in a thrilling five-set quarter-final and edged out American giant John Isner in a gruelling semifinal that left him drained.

“I’m definitely not feeling as fresh now as I was coming into the week, but this was such an amazing tournament for all of us players,” Anderson said.

“We dedicate our whole lives to try and fight for a spot to be on this (centre) court and for the last while there have only been a few individuals who have made it out here, so that’s what it had to take for me to get here.

“I would have taken another 21 hours to have the opportunity to play out here.”

They were defeated in a five-set battle against the American pairing of Mike Bryan and Jack Sock.

“South Africa’s had a long history of tennis, and we’ve not been so great the last few years but I know there’s a ton of great tennis players,” said Anderson, the first SA player to reach the men’s singles final at the All England Club in nearly a century.

“The support I’ve had throughout has been amazing, with all the flags flying out here. Hopefully in 20 years somebody might be standing here with that trophy, saying they saw me playing here and I was an inspiration for them to get there.”