It was a particularly memorable day in the long jump. 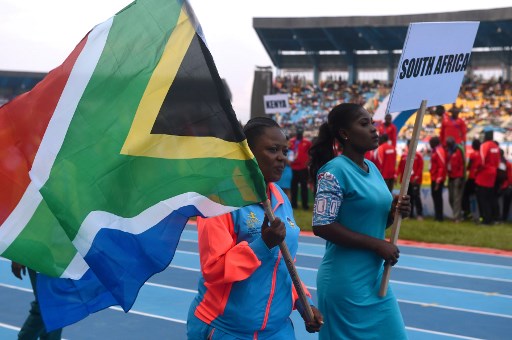 Shaking off the troubles they have faced, hampered by travel delays, humid conditions and a bumpy track at Stephen Keshi Stadium, the South African team showed their class as a continental track and field giant on Thursday’s second day of the African Athletics Championships.

With the lead changing hands on multiple occasions in a tightly contested battle, Samaai came out on top with a leap of 8.45m.

Manyonga settled for the silver medal with a best effort of 8.43m.

“It’s been an emotional, hard fought journey but I’ve persevered,” said Samaai, who had taken a back seat to Manyonga for the last couple of seasons.

“I think losing builds character and that made me strong.”

In the men’s 100m final, Akani Simbine and Simon Magakwe both had shaky starts, but they recovered well.

Simbine burst over the line in 10.25 seconds, adding the African title to the Commonwealth crown he won earlier this season.

Magakwe was disappointed after losing his balance out the blocks but he was satisfied to have earned bronze in 10.35.

“We wanted to come out here and show Africa that we’re the dominant country in sprinting, and we just want to keep growing,” Simbine said.

Discus throw giant Victor Hogan also won gold, delivering a 60.06m heave to bounce back after he had been stripped of his 2016 African title due to an anti-doping ban.

In other disciplines, Rikenette Steenkamp secured silver in the women’s 100m hurdles final in 13.18 and teenage prodigy Kayle Blignaut snatched bronze in the men’s shot put with a 19.05m heave.