South Africa's tennis star had the added 'complication' of having to eliminate a great friend in Jeremy Chardy. 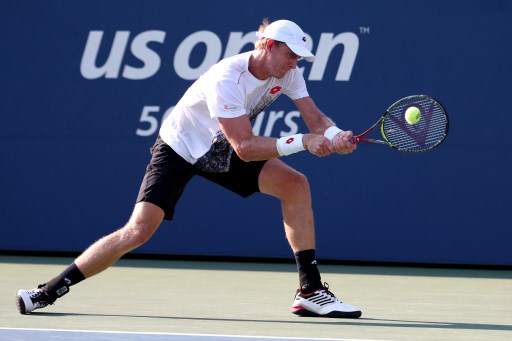 Kevin Anderson of South Africa returns the ball during his men's singles second round match against Jeremy Chardy of France on Day Three of the 2018 US Open at the USTA Billie Jean King National Tennis Center on August 29, 2018 in the Flushing neighborhood of the Queens borough of New York City. Al Bello/Getty Images/AFP

Satisfied with a solid performance, Kevin Anderson admitted he was relieved to get his second-round match out the way at the US Open, after sweeping aside close friend Jeremy Chardy of France in straight sets.

Anderson, a finalist at the hard-court Grand Slam tournament last season, cruised past Chardy by securing a 6-2 6-4 6-4 victory on Wednesday night.

After requiring more than four hours to negotiate his way past American Ryan Harrison in his first-round match, Anderson needed less than two hours to bury Chardy’s title ambitions.

The No 5 seed, enjoying the best season of his career on the ATP Tour, reached the third round at Flushing Meadows for the fifth year in succession.

He was set to meet Canadian teenager Denis Shapovalov, who stunned his opponents by reaching the fourth round of the prestigious tournament last season, for a place in round four.

“It was pretty hot out here today,” Anderson told the event website after his clash against Chardy.

“The ball was flying around a bit and the last game was obviously a little tricky, but overall I played a great match.

Meanwhile, fellow South African Raven Klaasen got his campaign off to a promising start with Michael Venus of New Zealand in the men’s doubles competition.

Klaasen and Venus, who entered the tournament as the No 8 seeds, eased past Lukas Lacko of Slovakia and John Millman of Australia with a 6-2 6-2 win in the first round.

The duo, who reached the finals at Wimbledon earlier this year and again at the Canadian Masters earlier this month, cruised into the second round.

They were scheduled to face either Argentina’s Maximo Gonzalez and Chile’s Nicolas Jarry, or the pairing of Spaniard David Marrero and Polish partner Marcin Matkowski, for a spot in round three.