EFC’s ‘The Beast’ dedicates victory to all of Africa 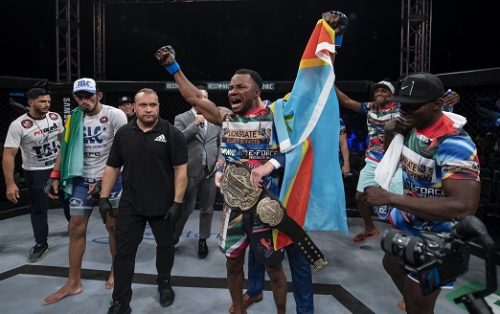 The DRC’s Gunther Kalunda stood victorious as his hand was raised at EFC73 at Sun City on Saturday night.

“I don’t fight just for my country, I fight for all of Africa,” shouted an exhausted Kalunda, after he claimed the interim welterweight belt when he beat Brazilian Brazil’s Jose Da Rocha via a unanimous decision after five hard-fought rounds.

The Congo native has now paved the way for a high-profile clash with Dricus du Plessis which will again unify the welterweight division.

“I came to the EFC to fight. If Dricus doesn’t want to come down to my division I will go up to middleweight to fight him,” added Kanyeba.

In the co-main event American Jared Vanderaa  was just too strong for crowd favourite Elvis Moyo as he got the TKO victory in the second round.

One of the most impressive performances on an exciting night of mixed martial arts came from ring veteran Anicet Kanyeba.

The Congolose heavy-hitter was the underdog going into this fight against South Africa’s Cameron Pritchard, but showed his contempt for sentiment, flattening Pritchard with strikes in a blistering first round.

Sizwe Mnikathi learnt why Steven Goncalves is becoming a  threat in the featherweight division when he was choked out in the first round.

In the opening bout on the main card, heavyweight Ricky Misholas saw off Juan Bezuidenhout with a TKO finish.

The legendary Misholas entered the bout with a chip on his shoulder, making the fight personal due to Bezuidenhout training with Misholas’ Congolese compatriot and simultaneous EFC heavy and light heavyweight champion, Champion Dalcha.