The 25-year-old still finished the highest of the South Africans at the Alfred Dunhill Championship but it could've been so much better. 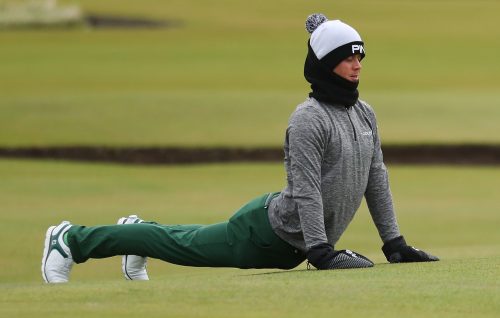 Brandon Stone of South Africa stretches during day four of the 2018 Alfred Dunhill Links Championship at The Old Course on October 7, 2018 in St Andrews, Scotland. (Photo by Warren Little/Getty Images)

A bogey, double-bogey end to his final round saw Brandon Stone drop from a tie of fifth to a share of 20th place in the Alfred Dunhill Links Championship won by Denmark’s Lucas Bjerregaard here Sunday.

The 25-year-old, who won the Scottish Open at Gullane in July with a brilliant final round 60, could only manage a last day 74 this time for a seven-under 281 aggregate.

Sunday’s final round here saw an 8.30am “shot-gun” start – everyone teeing off at the same time on different holes – to ensure an early finish, thereby avoiding the 65km/h winds scheduled for mid-afternoon.

Stone started his round at the par-4 18th which he parred and with two holes to go was one under par for the round after a chip-in for a birdie three at 15.

But he bogeyed 16 and then found the Road Hole bunker at 17, played a fair recovery onto the green only to three-putt for a double-bogey six.

“I was disappointed with my finish and I didn’t compete like I wanted to today. The other three rounds here were all under par and I had 65 here yesterday, so overall I guess it wasn’t too bad seeing that this was my first tournament back after six weeks not playing (in which time he got married and went on honeymoon).”

The top South African here, Stone now plays the British Masters this week, heads for Dubai to train next week and then ends the year with a busy schedule with tournaments in Shanghai, Turkey, at Sun City for the Nedbank Challenge, Dubai, Mauritius, Johannesburg for the Joburg Open, and Leopard Creek for the Dunhill Championship.

“So hopefully here at St Andrews was just a warm up for better things to come as this year draws to a close.”

Of the other South Africans to make the cut here Louis Oothuizen closed with a 71 for 284, Trevor Immelman and Darren Fichardt finished on 285, Ernie Els, Peter Karmis and Christiaan Bezuidenhout on 286, Branden Grace on 287 and Oliver Bekker on 288.

Bjerregaard closed with a day’s best 67 as the wind became stronger throughout the round, and won by one on 15-under-par 273. Overnight leader Tyrrell Hatton, the champion here last year and in 2016, tied for second with fellow Englisman Tommy Fleetwood on 274.

Hatton, bidding to emulate Tiger Woods, Sir Nick Faldo and Colin Montgomerie by winning the same tournament three times in a row, signed for a closing level-par 72 to miss his chance.