For the first time in their Diamond Challenge campaign, the Proteas didn't quite have it their own way. 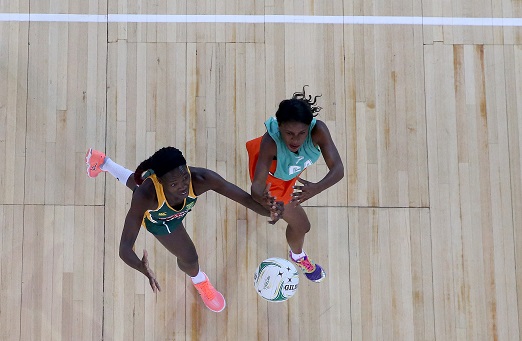 Phumza Maweni of the Spar Proteas and Beauty Nakazwe of Zambia in action during day 4 of the Netball Diamond Challenge at the Ngoaka Ramatlhodi Indoor Sports Centre on November 30, 2018 in Polokwane, South Africa. (Photo by Reg Caldecott/Gallo Images)

While they were pleased to remain unbeaten after four matches in the Diamond Challenge series, captain Bongi Msomi admitted the Proteas netball team were given a shake by a gutsy Zambian side in Polokwane on Friday.

Though they never really challenged for the lead, Zambia put up a brave fight.

The Proteas displayed their class, however, and after taking a 28-18 advantage into the half-time break, the hosts shook off a brief interruption caused by a power failure in the final quarter to extend the gap, securing a 57-36 victory.

“They definitely brought the fight to us today,” Msomi said.

“It was what we expected, to be honest. We knew they could play and would come hard at us and we were really tested.”

While their Zambian opponents were 12 places below the Proteas in the world rankings, Msomi believed the match had given them valuable experience as they continued their build-up to the 2019 Netball World Cup in Liverpool.

“I think it was great for us to get a game like this, to get a bit of frustration here and there, but then we picked it up again somewhere, somehow,” said the skipper.

Their battle, according to Msomi, had exposed some of the areas which they needed to work on in their game.

“I am a little bit dissatisfied with what we put on court today.

“Obviously we know how much we expect from each other and we know we need to go back and reflect, and then come back tomorrow and finish off strong.”

Earlier, the SA Presidents XII bounced back from a defeat to the national senior side by beating Zimbabwe 58-34 in their penultimate match of the five-day tournament.

Botswana, meanwhile, picked up their first win, earning a 55-48 victory over Namibia, who were the only team without a point heading into Saturday’s final day of competition.