The 30-year-old shows that he's as evergreen as ever in the pool, but has decided to call it a day. 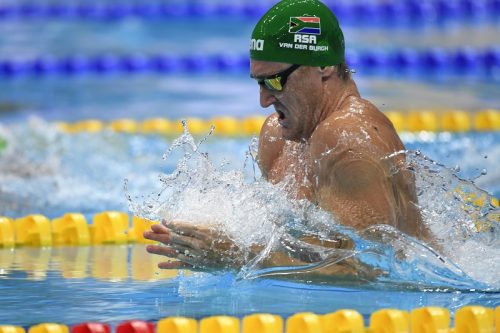 Cameron van der Burgh’s spectacular career would come to a close this week, the former Olympic champion confirmed on Wednesday, after he reclaimed the 100m breaststroke title by storming to a stunning victory on day two of the Fina World Short-Course Championships in Hangzhou.

Van der Burgh touched the wall in 56.01 seconds, securing the global 100m title in his specialist stroke for the second time, before announcing his retirement from competitive swimming.

“It is the last one. It is sad but I am happy to end on a high,” Van der Burgh said.

“The last 25 metres was the most pain I have ever had in my life in swimming, so it was a good way to finish.”

It was Van der Burgh’s seventh medal at the biennial short-course showpiece, though he was expected to turn out again in defence of his 50m title later in the week.

His 10-year international career also included two medals at the Olympic Games, 10 medals at the Fina World Championships in the long-course format, and eight medals at the Commonwealth Games.

The 30-year-old South African shattered multiple world records over the last decade, setting global marks over the 50m and 100m distances in the short-course and long-course formats.

Meanwhile, in other events on day two of the World Short-Course Championships, teenager Erin Gallagher was in record-breaking form in the preliminary rounds of the women’s 100m freestyle.

Gallagher clocked 53.09 to break her own African record in the heats, and she went even quicker in the semifinals, finishing seventh overall in 52.70 to book her place in Thursday’s final.

Chad le Clos, who had opened the SA team’s medal count with silver in the 200m butterfly on the opening day of the gala, stuck up his hand again as one of the favourites in the 100m butterfly event.

The defending champion was second quickest in the semifinals, touching in 49.07 and progressing to the final, also to be contested on Thursday.