Caster Semenya shows her class, but it's two younger talents that provide much excitement ... and debate. 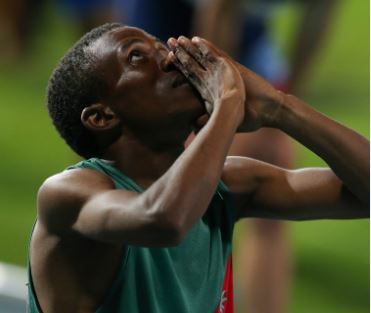 A trio of the country’s top 800m athletes made an explosive impact at the Athletics Gauteng North Championships in Pretoria over the weekend, with world champion Caster Semenya expanding her impressive range, rising star Tshepo Tshite making a career breakthrough, and teenager Ntando Mahlangu relaunching one of the most controversial debates in global track and field.

On the eve of an imminent announcement by the Court of Arbitration for Sport (CAS) regarding her future as a middle-distance specialist, Semenya fired a warning at international officials by winning the provincial 5 000m title.

With the 5 000m event excluded from a potential ban based on new International Association of Athletics Federations (IAAF) gender rules, Semenya would be able to compete over the distance despite the CAS decision.

Offering an indication of her potential over 12-and-a-half laps, Semenya completed the race in 16:11.59 to secure the provincial title on Saturday, after winning the 1 500m final earlier in the day in 4:14.69.

Meanwhile, her training partner Tshite delivered a superb performance of his own in the men’s 800m final.

Tshite shrugged off the high altitude setting, scorching around the track in 1:44.69 and shattering his personal best.

Perhaps the most notable performance, however, was produced by Mahlangu.

He crossed the line more than two seconds faster than any able-bodied South African youth athlete had previously run over the distance.

His result reignited a debate which had been put on ice after former sprinter Oscar Pistorius won a case at the CAS in 2008 which cleared him to compete against able-bodied athletes.

Mahlangu’s situation was not identical to that of Pistorius, however, raising new concerns regarding fairness and eligibility.

While Pistorius argued that his blades did not give him a technical advantage over his able-bodied opponents, the debate around Mahlangu’s participation in the 800m event was likely to revolve around fatigue levels and the build-up of lactic acid.

Mahlangu, who also won the provincial youth 400m title in 45.71, was expected to compete again at the SA U-18 and U-20 Championships in Paarl next month.