Women in sport: SA’s queen of all surfaces

Kesa Molotsane might've been a relatively late bloomer as a distance athlete, but once the breakthrough came it was simply spectacular. 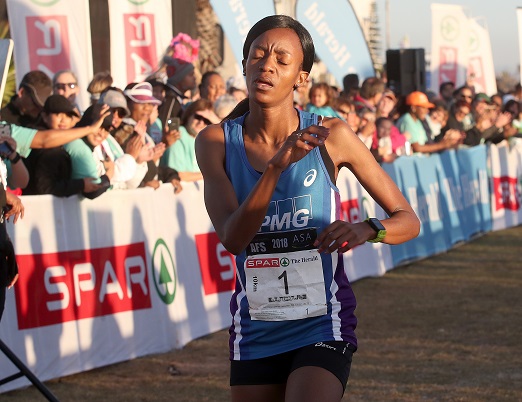 Kesa Molotsane crosses the line in first place during the 2nd Spar Women's Challenge at Pollok Beach on May 06, 2018 in Port Elizabeth, South Africa. (Photo by Reg Caldecott/Gallo Images)

Though she was not new to the sport, and had already enjoyed some success at elite level, a move to the road two years ago elevated Kesa Molotsane’s status, and she has since established herself among the best distance runners in the country.

Molotsane, 27, started running in primary school, and while she did not make a major impact as an athlete until she was in the senior ranks, she spent many years developing her fitness base before launching her spectacular breakthrough.

Raised in the small town of Thaba Nchu near Bloemfontein, she matriculated from Navalsig High School in 2009 before joining the University of the Free State where she received a bachelor of arts in anthropology and sociology in 2014.

Coached by former national 800m and 1 500m record holder Sarina Cronje, Molotsane offered a glimpse of her potential in 2016 when she won the SA cross country title in George, finishing nearly half a minute ahead of runner-up Glenrose Xaba.

It was in 2017, however, that the full extent of her ability was placed on show during a dominant domestic campaign.

5 000m title on the track in Potchefstroom, and she went on to finish second behind Xaba at the SA Cross Country Championships before closing out her season by holding off a challenge from Nolene Conrad to win the national 10km title on the road in Nelspruit.

But for all the titles she won and finals she reached in the 2017 season, it was in the lucrative Spar Women’s Grand Prix 10km series where Molotsane really made a name for herself by outclassing the best road runners in South Africa.

On her Grand Prix debut in Cape Town she clocked 32:59 – a time which still stands as her personal best – and while she finished one second behind Louisa Leballo in a sprint for the line, her more experienced opponent was later disqualified for doping.

Molotsane’s lanky stride carried her to two more Grand Prix victories that year, and she finished on the podium at all six legs of the series, winning the overall title and taking home a cheque of R173 000.

Last year’s results were not as impressive, by the standards she set the previous season, but Molotsane has proved in the early stages of the 2019 campaign that she is back to her best.

In January she beat Olympic 10 000m runner Dom Scott-Efurd by eight seconds to win the senior women’s 10km race at the national cross country trials, and she went on to lead the South African charge by finishing 42nd at the World Cross Country Championships in Aarhus in March.

Last month the Murray & Roberts Running Club athlete also grabbed the bronze medal behind Caster Semenya and Scott-Efurd in the women’s 5 000m final at the national track and field championships in Germiston.

And after finishing third against a strong international field at the opening leg of the Spar Grand Prix in Port Elizabeth last week, Molotsane was gearing up for another crack at the overall crown which was lifted by perennial rival Xaba last year.

“I’ve got quite a long season,” Molotsane admitted, looking ahead to the remainder of the 2019 campaign.

“From this month onwards I’m going to be focussing on the Grand Prix races and a few others, but I’m still waiting for confirmation from race organisers before I know what else I’ll be doing this season.

“I’m still trying to gauge myself in terms of fitness because I’ve been focussing on cross country training, and now to transition to road running, I think this has been a good start for me. I’m really happy.”

Though she had become known for her versatility across a range of surfaces, Molotsane was likely to concentrate on road races for the rest of this season, rather than embarking on an international campaign on the track.

“Normally at this time of the year I’m focussing on speed work, but I’ve been preparing for longer stuff than usual,” she said.

“It’s quite tricky for me to divert from cross country training to the track, and it’s easier to make that transition to the road, but we’ll have to see how it goes.”