Comrades taken to another level: heroes among heroes

We take a look at some of the participants who tackled additional challenges beyond the 87km race. 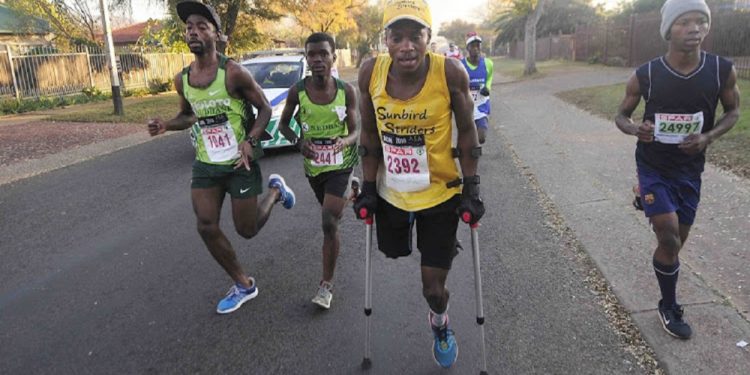 Though all entrants had their own personal mountains to climb at the Comrades Marathon, some entrants in the mass field took their battles to another level on the road between Durban and Pietermaritzburg at the weekend.

We take a look at some of the participants who tackled additional challenges beyond the 87km race.

Of all the people who have not reached the finish of the Comrades Marathon, Luvuno must be the most celebrated, and he deserves all the adulation he receives.

An amputee who uses crutches, he took part in the gruelling race for the second time, albeit controversially.

He was not given an official entry, as he had not qualified to participate, but while traffic officials had allowed him to share the road last year and he had been given an official race number, he was afforded neither of those privileges this year.

Wearing his “unofficial” 2018 number and giving himself some additional time by starting early, he took to the road nonetheless, and after officials reportedly stopped his support vehicle at around 35km, he continued until he was collected by a sweeper vehicle with around five kilometres remaining.

Stand in his path and Luvuno will find a way to keep moving forward. He is a champion in every sense of the word.

Proving that a mix of generosity and insanity has its benefits, two men doubled up with a back-to-back attempt for charity.

Raising awareness of cystic fibrosis, Gerald Pavel and Graham Wells left Pietermaritzburg on Saturday afternoon, completing the route backwards before joining the rest of the field at the start in Durban.

After battling through the cold and rain in the dark, Wells had to withdraw due to injury, but Pavel managed to finish in 11:55:47, less than five minutes before the final gun.

Comrades conditions are challenging enough during the day, but at night they are brutal, and both men did well to get as far as they did to raise funds for the ‘Run for NiQi’ campaign.