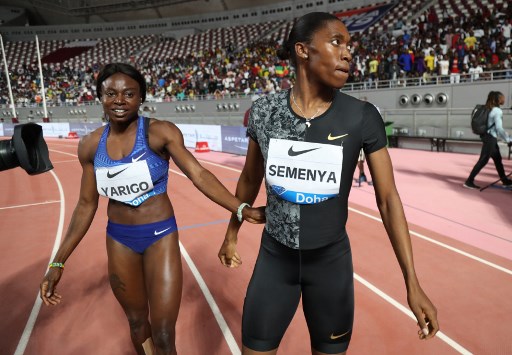 South Africa's Caster Semenya is congratulated after winning the women's 800m during the IAAF Diamond League competition on May 3, 2019 in Doha. Picture: Karim JAAFAR / AFP

Details of the personal battle Caster Semenya had faced over the past decade were released for the first time yesterday, while the International Association of Athletics Federations (IAAF) received widespread criticism after apparent flaws were revealed in the organisation’s defence of its controversial new gender rules.

With the world 800m champion awaiting the result of an appeal process at the Swiss Supreme Court, which was expected to be concluded by the end of this month, Semenya’s legal team released the full report of the recent arbitration case which she lost at the Court of Arbitration for Sport (CAS).

In their argument, Semenya’s lawyers pointed to discrepancies in the findings of the IAAF study, which suggested that elevated levels of natural testosterone offered an athletic advantage of up to 3%, which was less than Semenya’s average winning margin in the 800m event in recent years.

The global body had apparently also omitted some events from the new ruling which had produced more significant results than those in which Semenya competed, suggesting she had been targeted.

“It feels like this new rule was created because of me,” Semenya told the court.

She also said athletes who were restricted by the IAAF’s differences of sexual development (DSD) rules were likely to quit, as competing against male opponents was “an insult” to female athletes.

Semenya said she had experienced some side-effects – including weight gain, fevers, nausea and abdominal pain – when the IAAF had forced her to take hormone suppressants after she won the 800m world title in 2009.

Widely considered the best female middle-distance runner in the world, Semenya insisted her human rights had been violated.