One of South Africa's most decorated Olympians is still giving back to swimming. 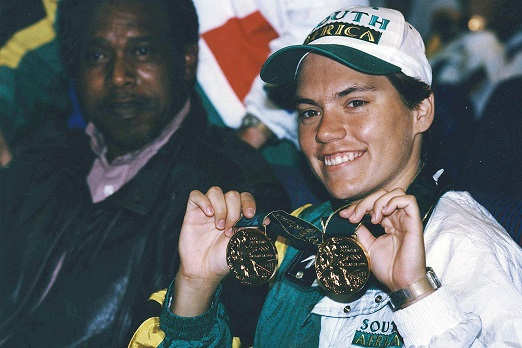 Of all the elite South African women who have shone in various codes since the nation’s readmission to sport some 28 years ago, Penny Heyns remains one of the most recognisable, and she is one of few who have truly established themselves as household names across the country.

Heyns made history in 1996 when she held off a challenge from American swimmer Amanda Beard to win the women’s 100m breaststroke title at the Atlanta Olympics.

Though distance runner Josiah Thugwane would also go on to win the men’s marathon, Heyns became the first South African to secure an Olympic gold medal in 44 years, ending a drought which had begun after high jumper Esther Brand and backstroke swimmer Joan Harrison had stepped on top of the podium at the 1952 Games in Helsinki.

And two days later she went on to beat Beard once again in the 200m final, becoming the first woman to achieve the 100m/200m breaststroke double and carrying the SA team to 27th place in the final table by bagging two of the nation’s five medals.

Born in Springs before moving with her family to Durban, Heyns began her top-flight career as a teenager when she turned out at the 1992 Barcelona Olympics at the age of 17.

Though she did not progress beyond the heats in the 100m or 200m events, the breaststroke prodigy’s mere presence was a sign of things to come.

Two years later she secured the 200m bronze medal at the Commonwealth Games in Victoria, at the age of 19, and in 1995, while studying psychology at the University of Nebraska, she earned double gold at the World Student Games in Fukuoka.

It was her performances in 1996, however, which will best be remembered.

At the national championships in Durban, four months before the Atlanta Games, Heyns touched the wall in 1:07.46 to set her first world record in the 100m event.

She would go on to lower the mark four more times over the next three years, while her career also included nine other breaststroke world records over distances ranging from 50m to 200m in the long-course and shortcourse formats, and at one point she held five global marks at the same time.

Though she would not go on to match her 1996 season in terms of medals, Heyns earned three silvers behind Japan’s Masami Tanaka at the 1999 World Short Course Championships in Hong Kong, and she bagged 100m bronze at the 2000 Sydney Olympics before announcing her retirement.

“In a sense I was a bit of a pioneer for South Africa because I was based outside the country, so when I did retire and go home it was a rollercoaster ride for about 10 years,” Heyns said at last year’s Fina World Aquatics Convention, looking back on the transition she had to make.

“Moving back to South Africa I had to deal with relative fame, which I wasn’t used to in the United States, as well as security issues, and I had to discover who I was because I didn’t just want to be known as a swimmer.”

Now 44, Heyns remains as recognisable as ever, having retained her place in the public eye as a motivational speaker and television presenter.

“I’ve realised the techniques which come naturally to athletes need to be transferred into the world of business or whatever area you choose to focus on,” Heyns said.

And though she is no longer chasing medals and records in the pool, the two-time Female World Swimmer of the Year has managed to remain part of the sport in which she excelled.

Aside from her role as chair of the Fina athletes’ commission, Heyns continues to share her expertise and experience as a coach, and the value she offers the sport is unlikely to diminish any time soon.