Confident Proteas have a lofty goal

SA's netball darlings might not be favourites at the World Cup, but they want a podium finish nonetheless. 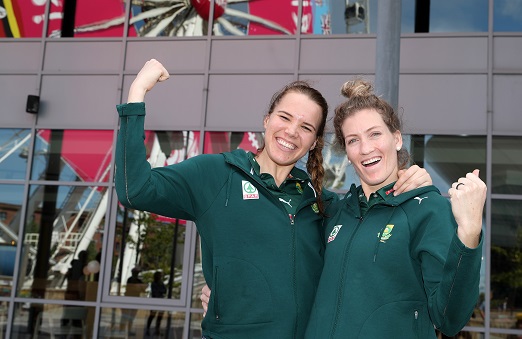 Sigi Burger, SPAR Protea player and Karla Pretorius (Vice-captain) during the Previews to the Vitality Netball World Cup in and around Liverpool on July 11, 2019 in Liverpool, England. (Photo by Reg Caldecott/Gallo Images)

While they are not among the favourites for the title, South Africa are hoping to punch above their weight by delivering a breakthrough performance at the Netball World Cup starting in Liverpool on Friday.

Despite not reaching the semifinals of the quadrennial showpiece since the national team bagged the silver medal at the 1995 edition in Birmingham, Proteas captain Bongi Msomi was confident of their chances in the build-up to the tournament.

Receiving some crucial time together on court last week, the SA squad had earned a convincing 2-0 victory in a two-match series against Wales in Cardiff, and Msomi was pleased with their form.

“We are playing well as a team, we’re confident and looking forward to what lies ahead,” the skipper said.

Though they were facing title contenders Jamaica in the first round, the Proteas were expected to coast into the second round, needing to finish among the top three in a group which also included lowly ranked teams Fiji and Trinidad and Tobago.

Since the 2015 World Cup in Sydney, where they finished fifth, South Africa had narrowed the gap on the world’s top-ranked teams.

They secured a rare victory over England in the Quad Series earlier this season, while various members of the squad had been able to hone their skills in professional leagues overseas.

And while they again settled for fifth place at last year’s Commonwealth Games, Proteas coach Norma Plummer believed they had the ability to end a 24-year drought by securing a podium place at the 10-day spectacle in Liverpool.

“They know they don’t have to stand back for anybody,” Plummer said.

“There are five countries that can make it to the top and we are one of them.”

The Proteas were set to face Trinidad and Tobago in their opening clash at 4pm on Friday.