Women in Sport: The speed queen who swopped sprints for studs

Alyssa Conley was once the national champion in the 100m and 200m. Disillusioned with athletics, she's now aiming to be a women's Blitzbok. 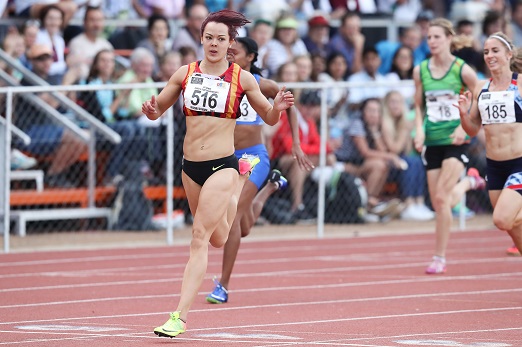 After being dropped by national athletics selectors in 2017, Alyssa Conley was so despondent she decided to hang up her spikes, and it seemed one of the country’s fastest women was lost to South African sport.

Eager to prove you can’t keep a good woman down, however, Conley has since traded her spikes for a pair of rugby boots, and she aims to make history at the 2020 Tokyo Olympics.

Though she remained reluctant to turn her back on the track permanently, the 28-year-old former sprinter revealed this week that she was pleased with the decision she had made.

“You never know what the future holds, so I don’t want to say it’ll never happen, but I’m focussing everything on rugby at the moment,” she said.

Born in Johannesburg, Conley took up the sport of sprinting as a child, and as a teenager she reached the 100m and 200m finals at the 2007 World Youth Championships in Ostrava.

One of the country’s most promising speedsters, she struggled with injuries in the early stages of her senior career, and after winning the SA 100m title in 2013 she vanished from competitive athletics.

Overcoming her injury troubles, however, she made a spectacular comeback in 2016 under the guidance of coach Morne Nagel.

Delivering a stunning upset against the nation’s fastest women, Conley won the SA 100m and 200m titles, and she went on to secure the 200m silver medal at African Championships in Durban before representing the country in the 200m event at the Rio Olympics.

After retaining her national crowns over both distances in 2017, however, Conley was controversially omitted from the SA team for the IAAF World Championships in London due to Athletics South Africa’s stringent qualifying criteria.

Unsure what her future held, Conley was reluctant to continue putting in the hard work and producing the goods if she was not going to receive just rewards.

Approached last year by Springbok Women’s Sevens coach Paul Delport, who hoped to add a turn of his speed to the national squad during a rebuilding phase, Conley initially turned down the offer.

Delport was persistent, however, and having grown no less despondent about her prospects as a sprinter, Conley decided to give it a go.

“There was just too much politics in athletics, and I felt we were not getting enough support as athletes, so I lost my zeal for the sport,” she said.

“I love the new challenge and it has been great to be involved in a team environment.”

Accustomed to concentrating entirely on her own performance, Conley admitted the switch in codes had required some adjustment.

“In an individual sport, it’s all about you, but now I have to think of everyone else and what I’m doing for the team because I don’t want to let them down.”

Though she had not yet played a sevens rugby game, she had learned a great deal from her inclusion at national camps, and she had used ShadowBall to work on her skills and technique.

Working with ShadowBall head coach and former Springbok player Gcobani Bobo, she was confident she would be ready if she was selected for the SA team.

“The biggest challenge is to work on fitness because it’s a completely different approach.

“I need to work on movement and finding a balanced ratio between speed and fitness.

“Everything needs to be on point.”

Though she hoped to compete at the Africa Women’s Sevens tournament in Tunisia in October, Conley’s main goal was to represent the country at next year’s Tokyo Olympics, should the SA team qualify for the Games.

She may have lost interest in one sport, but her newly found focus on another has given her a rare chance to compete at the Olympics in two codes, and that would be a memorable achievement.

“I competed in an individual sport for 21 years, so this has opened new horizons for me,” said Conley, a sports management graduate from the University of Johannesburg.

“I also want to show women that sport in general can be a dream they follow, and they can be diverse.

“I don’t think women’s sport is well supported in SA, but Banyana Banyana and the Proteas netball team have done well this year, so things are changing, and hopefully the Springbok Women’s Sevens can make a difference as well.”