South Africa might belatedly have a chance of a rare medal at the IAAF World Champs. 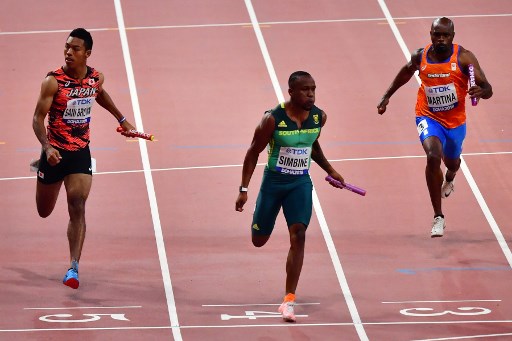 South Africa's Akani Simbine (C) leads as he crosses the finish line in the Men's 4x100m Relay heats at the 2019 IAAF Athletics World Championships at the Khalifa International stadium in Doha on October 4, 2019. (Photo by Giuseppe CACACE / AFP)

The national men’s 4x100m relay team progressed among the favourites into Saturday evening’s final, after shattering the African record on Friday night to win their heat at the IAAF World Championships in Doha.

They ripped more than half a second off the SA record of 38.24, which had been set by the team who bagged the silver medal at last year’s Commonwealth Games.

In a barrier-breaking effort, they also sliced a chunk off the African mark of 37.94, which had been held by Nigeria for 22 years.

Great Britain, who won the other heat in 37.56, were the only team to go faster in round one, with the SA squad cementing themselves among the podium contenders.

With limited chances remaining for the national team after eight days of competition at the 10-day spectacle, the sprint relay quartet were hoping to end the country’s medal drought with another near-flawless effort.