But this year's Comrades queen faces an interesting choice next year... 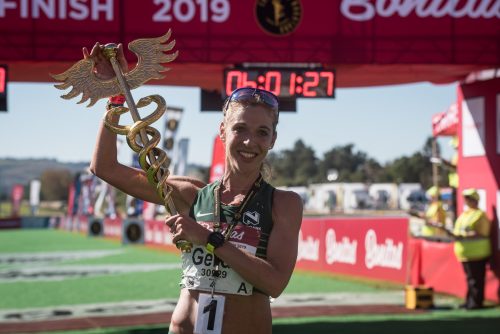 Gerda Steyn can be seen celebrating her win after crossing the finish line, breaking the record for the first woman runner to complete the comrades marathon in under six hours, 9 June 2019, Pietermaritzburg. Picture: Jacques Nelles

Ultra-distance star Gerda Steyn has booked her ticket to the 2020 Olympic Games, shattering her 42km personal best at the New York Marathon.

Steyn, who won the 56km Two Oceans and broke the women’s ‘up’ run record at the 87km Comrades Marathon earlier this year, was well inside the qualifying standard of 2:29:30 for the marathon race at the Tokyo Olympics.

Though she had not yet confirmed her intentions, Steyn had previously suggested she was eager to compete at the Games, and should she make the decision to do so, she could be absent from the ultra-distance circuit while focussing on the standard marathon next year.

If not, Steyn’s latest performance suggested Van der Merwe’s long standing Two Oceans and Comrades ‘down’ run records could be in real danger next season.

The inspirational Ernst van Dyk again had a great run, finishing fifth in the wheelchair race with a time of 1:40:00.