Tiger Woods couldn't resist a little last-minute needling before Sunday's charity showdown with Phil Mickelson, with a deadpan prediction that he and partner Peyton Manning would dominate. 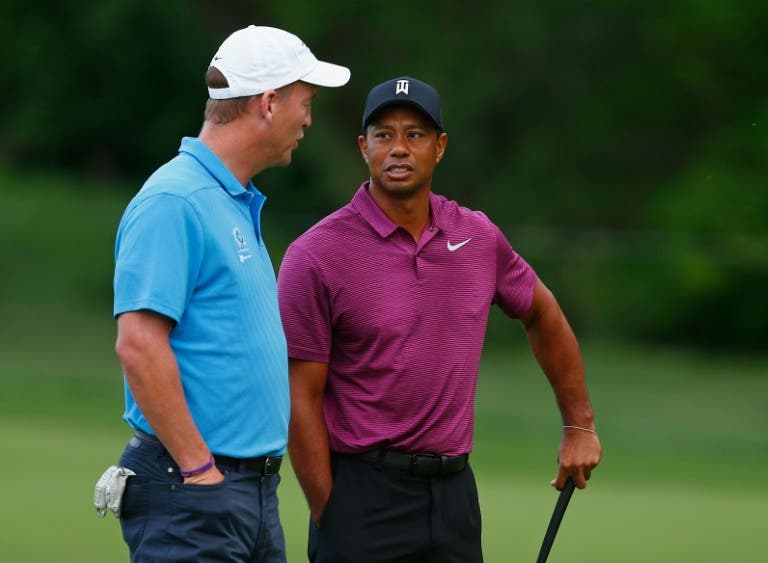 Tiger Woods and Peyton Manning chat during the 2018 Memorial Tournament pro-am, the two will team up to take on Phil Mickelson and Tom Brady in a charity match for COVID-19 relief. GETTY IMAGES NORTH AMERICA/AFP/File/Matt SULLIVAN

“At the end of the day, our team’s going to win, it’s just a matter of how much we’re going to win by,” 15-time major champion Woods said in an interview posted on Golf Digest’s YouTube channel.

“Do we keep it close, do we blow them out … we don’t want to have viewers turn off if we’re 9-up through nine, that’s probably not going to be good. So we’ll just be 8-up through nine — something like that.”

Reigning Masters champion Woods will team with Manning, a superstar NFL quarterback who retired in 2016 after winning his second Super Bowl title.

Five-time major winner Mickelson will team with Tom Brady, who recently signed with the Tampa Bay Buccaneers after winning six Super Bowl titles in 20 years with the New England Patriots.

The 18-hole match will include nine holes of four-ball and nine holes of modified alternate shot, with on-course challenges for charitable funds in addition to the $10 million pledged.

With the US PGA Tour and European Tour on hiatus amid the coronavirus pandemic, the made-for-TV event will be a welcome glimpse of live sports action, and the long rivalries among the players promise a little intensity even if it’s only a battle for bragging rights.

Television commentators include major winners Trevor Immelman and Jordan Spieth, along with Charles Barkley, the NBA great turned outspoken broadcaster who is the owner of a famously disjointed golf swing.

Woods and Manning look to have the edge going in.

Woods is a regular at Medalist golf course in Hobe Sound, Florida, and Manning boasts a slightly better handicap than Brady — who has had less time to focus on his golf game as he adjusts to life with a new team amid the COVID-19 pandemic.

For the legion of Woods-watchers around the globe, it will be a chance to see just how far the 44-year-old’s fitness has come since he lurched to a 68th-place finish at Riviera Country Club in Los Angeles in February.

Continuing trouble with his balky back saw him skip the WGC Mexico Championship, the Honda Classic and the Arnold Palmer Invitational, as well as the Players Championship — which was shut down early by coronavirus concerns.

Woods said in April he would have been ready for his Masters title defense — which is now set to come in November.

“Night and day,” he said of the improvement since February.

While the Woods-Mickelson rivalry may have lost some of its sizzle, Manning and Brady could add intrigue.

“They grew up playing football, not golf, but they’re going out of their comfort zone on national TV to showcase their golf game,” Mickelson said. “That’s not an easy thing to do.

“For them to do that and create a fun, entertaining environment that’s helping others, I have a lot of respect for it.”