In winning a third straight Australian Open for the second time, the Serb claimed his 18th Grand Slam title. 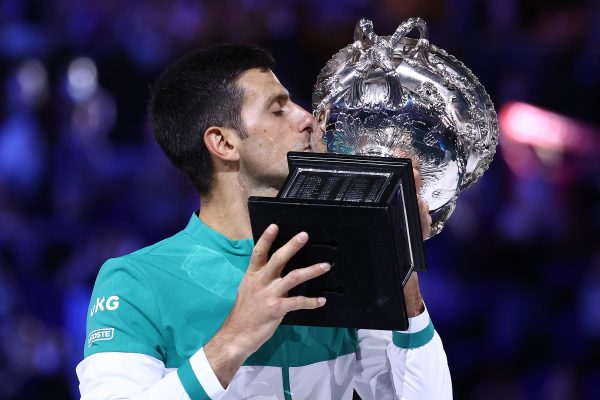 In winning a third straight Australian Open for the second time, the Serb claimed his 18th Grand Slam title to move within two of Roger Federer and Rafael Nadal who have 20 each, while denying Medvedev his first. 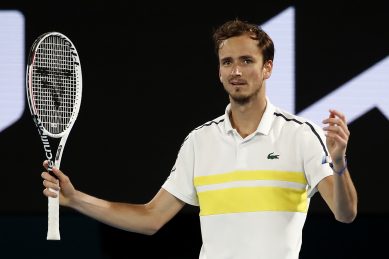 Daniil Medvedev of Russia was outplayed in three sets by Novak Djokovic in the Australian Open men’s final on Sunday. Picture: Getty Images

Rarely has a player been so dominant at a single tournament with the Serb’s record-extending ninth title moving him past Federer’s eight at Wimbledon but still a long way behind the 13 Nadal has won at Roland Garros.

But it was a rollercoaster ride to get there, with Djokovic dropping five sets en route to the final and battling an abdominal injury that nearly forced him to pull out after the third round.

Despite admitting it was a gamble to keep playing, with a risk the injury could get worse and affect the rest of his season, the 33-year-old chose to continue and it paid off.

Medvedev, 25, is one of the smartest players on tour, keeping his opponents guessing with his flat and low groundstrokes, changing up the pace and angles, as he blends impenetrable defence with opportunistic offence.

But the Serb, who held a 4-3 head-to-head record against him but had lost three of the previous four, had his measure.

In front of a pro-Djokovic crowd, Medvedev overcooked two forehands on his opening service game then sent one into the net to hand the Serb the first break points, then a wild backhand saw him immediately on the back foot.

Djokovic consolidated with a serve to love before the Russian finally got off the mark with a wobbly hold for 1-3. But then a failed drop shot and net volley from the top seed allowed the Russian to break back.

Long rallies ensued and it went with serve until some brilliant groundstrokes from Djokovic earned three break points at 6-5. Medvedev saved two but not the third to lose the opening set.

Undeterred, the tall, pencil-thin Russian kept coming and dialed up the pressure to break Djokovic’s opening serve in set two, only for the Serb to immediately strike back.

Djokovic won three games in a row, despite the disruption of two fans being ejected in an apparent refugee protest, as he took control.

He raced to a 5-2 lead with Medvedev smashing his racquet in frustration as the set and the championship began slipping away. 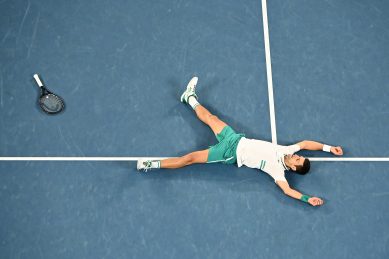 Novak Djokovic of Serbia celebrates victory in the final against Daniil Medvedev at the Australian Open on Sunday. Picture: Getty Images

Deflated, Medvedev dropped his opening serve in set three and never looked like finding a way back as Djokovic, in his 28th Grand Slam final compared to the Russian’s second, drew on his experience to close out the match, dropping to the court in celebration.

The win reinforced Djokovic’s status as world number one, where he will mark his 311th week when the new rankings come out on Monday, surpassing Federer’s record of 310.

Medvedev will move to a career-high three in the rankings, behind Nadal.

Medvedev, Fernandez advance to US Open semi-finals
1 month ago
1 month ago

Medvedev, Fernandez advance to US Open semi-finals
1 month ago
1 month ago