The Serbian had to deal with a muscle-tear injury that is still "not healed" and attacks from the media and public. 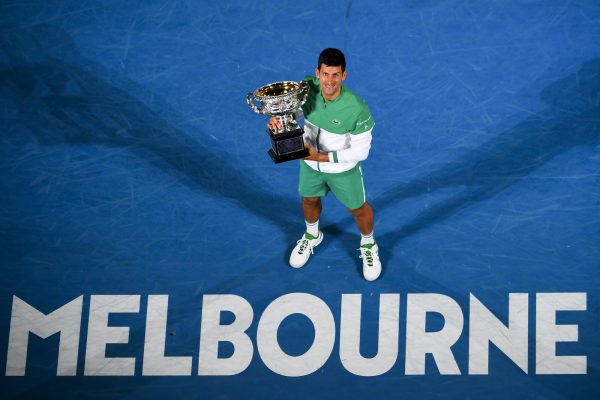 Novak Djokovic said his ninth Australian Open title came after one of the toughest tournaments of his career, with a muscle-tear injury that is still “not healed” and attacks from the media and public.

Despite the challenges, the world number one snuffed out the threat from in-form Russian Daniil Medvedev 7-5, 6-2, 6-2 to reinforce his status as the king of Melbourne Park and collect his 18th Grand Slam crown.

But there were numerous hurdles to jump, not least having to quarantine for 14 days and the negative reaction to a letter he wrote to Tennis Australia pre-tournament which was interpreted as a “petulant and selfish” list of demands.

“I think emotionally it was one of the hardest tournaments that I’ve ever had, to be honest,” the Serbian top seed told Australia’s Channel Nine on Sunday.

“We had quarantine and a lot of things happening in the media, then the letter that I wrote as ideas and recommendations that I got for players was misinterpreted as a list of demands. Then the next thing I was persona non grata here in this country.

“So it was tough dealing with all of this and then getting injured in the third round,” he added of the abdominal tear that almost forced him to pull out.

“It was a rollercoaster ride… I think it makes it even sweeter for me and a lot of positives from this tournament without a doubt.”

Djokovic sustained the injury during his third-round clash against Taylor Fritz.

After refusing during the tournament to reveal the nature of the injury, he said on Sunday it was an abdominal muscle tear.

“It’s a muscle tear… I went for an MRI and it showed a tear,” he said. “I understand people question whether there was a tear – but there is. For me it was obviously a huge obstacle and challenge.

“I guess we’re all different. I have maybe a great ability to heal. I don’t know. I just manage somehow with pills and painkillers and stuff.”

The nine-time Australian Open champion revealed he spent 10 out of 14 waking hours on the physio’s table having work done at one stage.

“It’s not healed up. I’m going to go for another MRI tomorrow before I travel. I’m definitely going to take some time off. I don’t know how long it’s going to take,” he said.

“But you know my whole energy and focus was here in Australia. If there was tournament where I want to risk any more damage, and try my hardest to battle, it’s here, it’s a Grand Slam.”

Djokovic’s win over Medvedev strengthened his hold on world number one, where he will mark his 311th week when the new rankings come out on Monday, surpassing Federer’s record of 310.

“I managed to achieve this historic number one. It seems unreal but of course I am very, very happy and proud of that,” he said.

“My focus now is the Slams, that’s where I want to shine. I know age is just a number but we have to also see things realistically, I am not 22 anymore.

“So I’m going to have to deal with the schedule and the calendar in a different way so I peak at the right time at the Slams.”