Jantjies to captain new-look SA ‘A’ team against Bulls

There are 12 changes to the team that played against the British and Irish Lions last Wednesday. 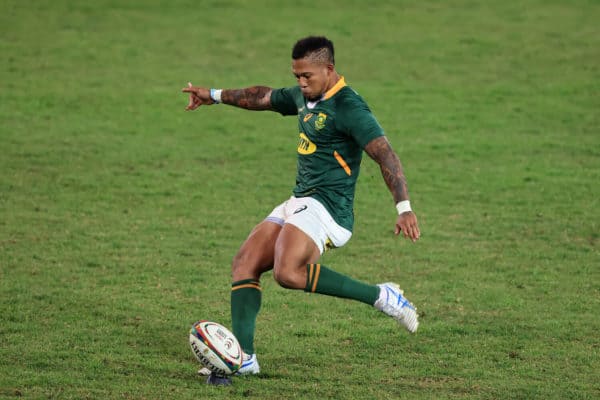 SA A captain Elton Jantjies will lead the team against the Bulls on Saturday. Picture: David Rogers/Getty Images

Springbok coach Jacques Nienaber made wholesale changes to South Africa ‘A’ for their clash against the Bulls at Cape Town Stadium on Saturday, with flyhalf Elton Jantjies leading the squad that features nine Rugby World Cup winners.

The encounter, which kicks off at 1pm, will be followed by the clash between the Stormers and British & Irish Lions at the same venue at 6pm.

ALSO READ: SA ‘A’ to face Bulls in curtain-raiser to Lions-Stormers clash

Nienaber, who made the trip from Johannesburg to Cape Town on Friday morning with a host of players who will begin their return-to-play protocols after recovering from COVID-19, made 12 changes to the starting team in line with his strategy to give as many players as possible the chance to stake a claim for places in the Test team.

Only three players who started in the team’s 17-13 win against the British & Irish Lions on Wednesday retained their places in the starting team – Damian de Allende (centre), Marco van Staden (flank) and Joseph Dweba (hooker).

Aphelele Fassi (fullback), Rosko Specman (wing), Cobus Reinach (scrumhalf), Kwagga Smith (No 8), all of whom started in the Test against Georgia two weeks ago, are back in the starting lineup.

Fassi, who made his Test debut at wing, will form an exciting back three with Specman and the uncapped Yaw Penxe, while exciting centre Wandisile Simelane will join forces with the experienced De Allende in the midfield.

Nienaber named a physical loose trio featuring Smith, Rynhardt Elstadt and Van Staden, while Nicolaas Janse van Rensburg is promoted from the bench to the starting team where he will start alongside Jean-Luc du Preez in the second row.

Dweba, meanwhile, will pack down with vice-captain Vincent Koch and Coenie Oosthuizen in the front row.

“We wanted another SA ‘A’ match to give all the players a chance to show what they are capable of before we enter the Test Series against the British & Irish Lions, and we are excited to give these players this valuable opportunity,” said Nienaber.

“With several changes to the matchday squad, there won’t be much continuity from Wednesday’s match, but the game time and the chance for these players to show what they can offer on the field will be invaluable with an eye on improving our match fitness and building momentum before we enter the Test Series.”