The South African legend is without question the greatest downhill racer of all time. 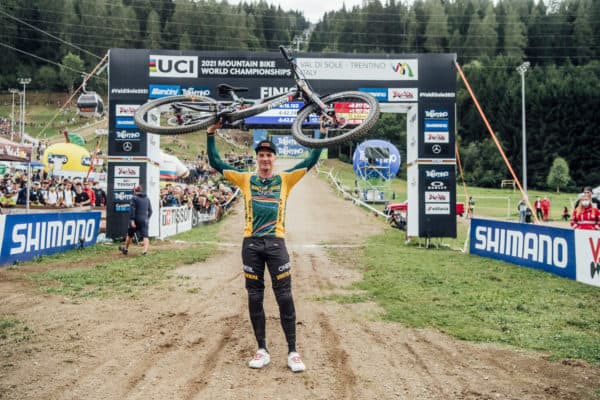 In the world of sport, there is a special place deep within the cosmos for athletes who stamp a permanent mark on their codes by rewriting the record books.

It is here, in a dimension reserved for legends, that you will find Greg Minnaar.

A living icon, Minnaar is widely considered the greatest downhill mountain bike racer of all time, earning him the nickname ‘GOAT’.

But the 39-year-old rider from Pietermaritzburg is not buying into the hype.

“I don’t know. I see it as more of a character,” he says in a video interview, Unfinished Business, with his Santa Cruz Syndicate team.

“It’s something I never expected to happen, so that’s possibly why I feel it’s just a character, or a nickname, rather than actually being the GOAT.”

At the age of three, Minnaar’s parents got him his first mountain bike, but he wasn’t happy. He had wanted a motocross bike, so he wore his father’s helmet, gloves and goggles when he rode, pretending his bicycle was a motorbike.

His initial dismay, however, developed into an obsession, and Minnaar displayed his tremendous potential in 1998 when he won the national downhill mountain bike title at the age of 16.

Eager to compete internationally, he then managed to convince his parents to allow him to drop out of high school in order to launch his professional career.

It wasn’t easy at first, travelling without his family as a teenager, but with his parents having taken out a second bond on their house in order to cover his costs, Minnaar stuck it out.

“It was a struggle. I was really homesick and I battled in Europe,” he recalls.

“That was the one point in my career where I didn’t feel I could actually make it.

“That was quite tough because I made a big sacrifice by leaving school to try and pursue my dream of racing, but I think people telling me I wouldn’t be able to make it, or that racing professionally would never be a reality, pushed me to make sure I succeeded.”

Three years later, in 2001, he stepped on the podium for the first time at the World Championships in Colorado, and he went on to become the most prolific champion in the history of the sport, winning 23 World Cup events and securing the overall World Cup series title three times in the downhill discipline.

He has also bagged 12 career medals at the annual World Championships, winning the global title for the fourth time in Val di Sole last week, at the age of 39.

Despite all his experience, Minnaar admits he still gets nervous at the start of a race.

“I feel quite stressed… I’ve got my headphones on and my eyes closed before a race, but it’s a massive storm inside.

“Then I just focus on what I need to do, from breaking into the corner to each rock on the route, the line I want to be on – and the goal is to push beyond 100% in each final while trying to eliminate the risk.”

Minnaar, who has spent most of his career with the Santa Cruz Syndicate, turns 40 in November.

While it is hard to imagine what else he has left to achieve, however, the veteran rider insists he’s not ready to call it quits, as he continues to carry the SA flag on the international circuit.

“I think if I fully mastered downhill and felt like I was on top of the world, or on top of the sport, I’d probably call it quits,” he says.

“But each year I finish I feel like there’s something more, or I haven’t quite excelled in one area, and I always find a weakness.

“I think that competitiveness is a clear indication that I’m still hungry to race.”