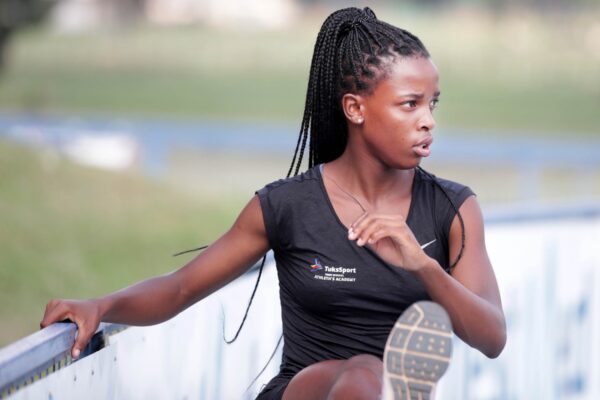 Though she has always known she is fast, having outrun all the boys and girls she played with as a kid, a family tragedy and the subsequent desire to help provide for her parents and siblings have been the driving forces behind Viwe Jingqi’s breakthrough performances on the track.

Jingqi isn’t just talented. She’s one of the most talented young sprinters South Africa has ever produced. But no matter what heights she reaches on the global athletics stage, she insists she will never forget her humble beginnings.

Born in Engcobo, a rural village in the Eastern Cape, Jingqi’s mother Nothando always wanted her to focus on her schoolwork, in order to ensure she gave herself the best opportunities at life.

Her father, Zweledinga, also motivated his daughter from a young age, but his focus was more geared towards ensuring she developed her natural athletic talent. Having been a 200m and 400m sprinter in his youth, Jingqi’s dad could see value in a sporting future for his daughter.

With her talent having been spotted, Jingqi received a bursary at TuksSport High School in Pretoria. And with the school having proved itself as an insitution that produces both academic and athletic results from its pupils, her parents can rest assured that their child is getting the best of both worlds.

“My mother has always been there for emotional support, but she is more focussed on my schoolwork,” says Jingqi, who is in grade 12.

“And my father said if I could do what he couldn’t do by breaking records, it would make him happy. So that’s what I’ve been working for, to put my name and my family’s name on the map.”

While she is only 17, her efforts to make ‘Jingqi’ a household name in South Africa have got off to a spectacular start.

At the SA U-18 Track and Field Championships in Potchefstroom last week, Jingqi had the heads of spectators spinning after breaking national records in four of her six races.

She shattered the SA youth mark in all three rounds of the 100m event, bringing the time down to 11.22 seconds, and she also cracked the record in the 200m final, scorching home in 23.03.

What was even more impressive than the lightning fast times she ran was the breakthrough she made in the sport, shattering SA youth records which stood for nearly 40 years.

While the level has been raised among South Africa’s fastest youth and junior boys in recent years, there hasn’t been the same improvement among the girls. Until now.

Jingi’s recent results have raised the bar, setting a new domestic standard in her age group.

“The one thing that has been keeping me going is my background,” she says.

But this is only the beginning, and if all goes well, Jingqi will become an international sensation over the next few years, with her sights set on competing at the 2024 Olympic Games in Paris.

However, following the loss of her older brother Vukile last year, who died in a car accident, Viwe is motivated by more than records and results.

“My brother and I were both very hard working, and our parents could see if we could work together then our family could have the life we’ve always wanted,” Jingqi says.

“We were very close and he wanted to see me do big things. I could always talk to him about anything that bothered me, so whatever I’m doing, I’m going to do it for him.”

As well as she has already run, Jingqi is aware that there is a lot more work to do if she is to challenge the fastest women on the planet.

But she’s not scared to keep her nose to the grindstone, and she’s ready to fight it out on the track.

“If I put my mind to something and say I’m going to do it, then I can do it,” she says.

“I work very hard. Even coach Paul (Gorries) says I’m very focussed at training and I make sure he fixes everything I do wrong.

“I also have a positive mindset. If I truly want something, I tell myself I’m going to do it, and I put a lot of effort into getting that thing.”

For all the pressure she faces, however, and the tragic loss that has driven her success this season, Jingqi says running is not a chore. It’s not easy either, but she believes she was born to do it, and she has no intention of slowing down.

“If you had the opportunity to be as fast as I am,” she says, “you would also be addicted. It’s a great feeling.”