There is a strong case to say that McIlroy has been the most consistent player this year. 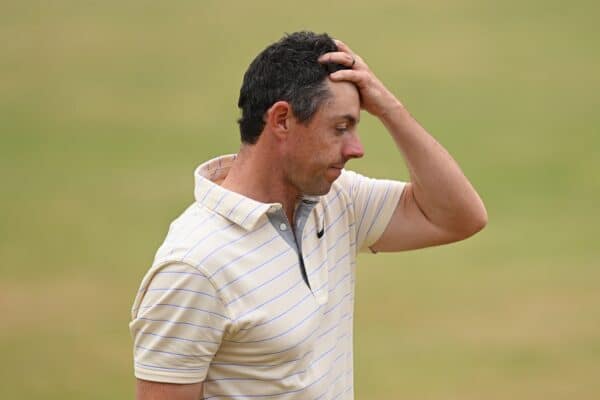 Rory McIlroy during the final round of the British Open. Picture: Getty Images

Rory McIlroy was left to wonder when he will end his wait to claim an elusive fifth major title after seeing the British Open slip from his grasp in a dramatic final round at St Andrews on Sunday.

The Northern Irishman had been in a share of the lead overnight alongside Norway’s Viktor Hovland and reached the turn in his fourth round in front on his own by a margin of two strokes.

A first major since 2014 seemed a certainty at that point and he went on to post a bogey-free 70 to finish on 18 under par for the week.

However, it was ultimately in vain as Cameron Smith surged away with a 64 to take the Claret Jug on 20-under.

“It’s one that I feel like I let slip away, but there will be other opportunities.”

While Smith went on a remarkable run of five straight birdies from the 10th on Sunday, McIlroy saw a series of birdie putts come up agonisingly short or just miss.

He ended up having to settle for third place after also seeing Cameron Young climb above him to finish as the runner-up and take half a million dollars more in prize money.

“I’ll rue a few missed putts that slid by. But it’s been a good week overall,” McIlroy insisted.

“I can’t be too despondent because of how this year has gone. I’m playing some of the best golf I’ve played in a long time. So it’s just a matter of keeping knocking on the door, and eventually one will open.”

McIlroy was the runner-up behind Scottie Scheffler in the Masters in April, came eighth at the PGA Championship at Southern Hills in May, and then tied fifth at last month’s US Open.

He also won the Canadian Open just before heading to Brookline.

There is a strong case to say that McIlroy has been the most consistent player anywhere this year, even if he fell just short in the majors.

“Today is one of those times. But I just have to dust myself off and come again and keep working hard and keep believing.”

He appeared unstoppable in the early years of his career, when he romped to victory in the US Open in 2011, cruised to victory in the PGA Championship the following year and then won the British Open at Hoylake in 2014 before adding another PGA title a few weeks later.

Incredibly, his major drought since then is going to extend into a ninth year, although he has now had nine top-five finishes in majors in the intervening period.

“I’ve been close and I keep knocking on the door. I can’t get too down on myself because the game is there. It’s just a matter of staying patient,” he said.

There is sure to be an adrenaline comedown after this week, and with the major season now over for 2022, McIlroy plans a short break before the FedEx Cup playoffs next month, starting with the St Jude Championship in Memphis, Tennessee.

“I’ve got three weeks off. I’m not going to play again until the first playoff event in Memphis,” he said.

“I’ve got a bit of time to rest and recover and try to take the positives, learn from the negatives, and move on.

“It’s one of the best seasons I’ve had in a long time. I want to finish the season off well.

“There’s still some golf to play. Major season is over unfortunately, but I still feel like there’s a little bit to play for.”