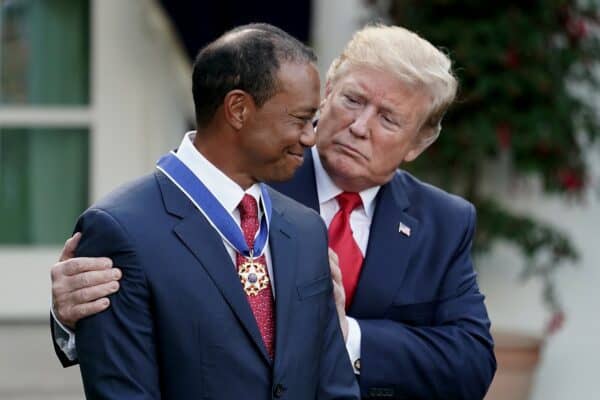 Former US President Donald Trump on Monday urged golfers to “take the money” and sign with the Saudi-backed LIV series amid reports more players were poised to join the controversial circuit.

Trump, who is hosting LIV events at two of his golf courses this year, said in a post on his Truth Social network that players should not hesitate to abandon the PGA Tour, which he branded “disloyal.”

ALSO READ: Shaking things up, LIV Golf is as exciting as it is controversial

“All of those golfers that remain ‘loyal’ to the very disloyal PGA, in all of its different forms, will pay a big price when the inevitable MERGER with LIV comes, and you get nothing but a big ‘thank you’ from PGA officials who are making Millions of Dollars a year,” Trump wrote.

“If you don’t take the money now, you will get nothing after the merger takes place, and only say how smart the original signees were,” he added.

Trump concluded the post with a message of congratulations to newly minted British Open champion Cam Smith, the Australian who stormed to victory at St Andrews on Sunday with a superb final round.

Smith is among the latest list of names who are reportedly poised to sign with LIV Golf, which has already recruited a slew of top names with jaw-dropping contracts which in some cases are reported to have run into the hundreds of millions of dollars.

Smith bristled — but did not issue an outright denial — when asked about reports linking him to LIV following his victory in the Open on Sunday.

“I just won the British Open, and you’re asking about that. I think that’s pretty not that good,” Smith said.

“I don’t know, mate. My team around me worries about all that stuff. I’m here to win golf tournaments.”

Besides Smith, LIV is also reported to be on the brink of signing Swedish star Henrik Stenson. Stenson is expected to be stripped of Europe’s Ryder Cup captaincy if he signs with LIV.

Golf analyst David Feherty has split with NBC and is expected to join LIV broadcasts, the New York Post reported on Monday. The 63-year-old native of Northern Ireland is a former US and European tour player.

Trump, meanwhile, did not address criticism of the involvement of his golf properties with LIV events by relatives of those killed and injured during the September 11, 2001 attacks on New York and Washington. Fifteen of the 19 hijackers involved in the atrocity were Saudi nationals.

In an open letter to Trump released on Sunday, the 9/11 Justice group urged Trump to cut ties to LIV Golf. Trump National Golf Club at Bedminster, New Jersey is set to host a LIV event on July 29-31, while his Trump National course at Doral in Florida will stage the October 27-30 tournament.

“We simply cannot understand how you could agree to accept money from the Kingdom of Saudi Arabia’s golf league to host their tournament at your golf course, and to do so in the shadows of Ground Zero in New Jersey, which lost over 700 residents during the attacks,” the group wrote in its letter.

“It is difficult for us to fully express the extreme pain, frustration and anger this upcoming tournament at Bedminster causes our community… it is incomprehensible to us that a former President of the United States would cast our loved ones aside for personal financial gain.”