Proteas on wobbly ground … and wobbly pitch in Hamilton

Faf du Plessis' decision to bat first in the third Test seems to backfire as a middle-order recovery is once again needed. 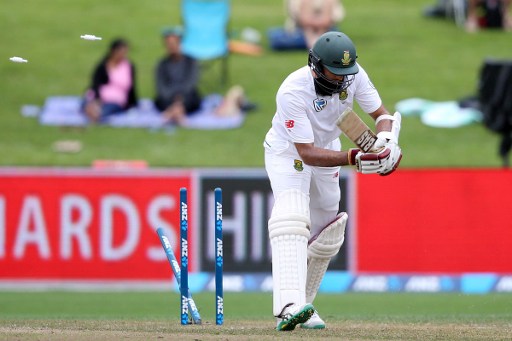 Rain and a frustrating wet patch on the outfield eventually had most of the say on the opening day of the third and final Test between the Proteas and New Zealand in Hamilton.

Only 41 overs were possible but there was still enough action to suggest the home side have the early upper hand.

South Africa ended the day on a decidedly wobbly 123/4 after Faf du Plessis won the toss and decided to bat on a strange pitch.

Indeed, on some spots the grass was almost 11mm long – according to the local broadcaster – while other patches were bare.

Nonetheless, it clearly gave the seamers plenty of support.

The Proteas unexpectedly handed Knights captain Theunis de Bruyn his debut in the struggling Stephen Cook, who had scored 17 runs in four innings on this tour.

De Bruyn though is not a specialist opener and it showed as he made a third-ball duck, prodding at a wider delivery and edging to slip.

His partner, Dean Elgar, became the latest international player to embarrassingly leave a delivery on his stumps and be bowled.

Hashim Amla, himself not in the greatest form, looked set to make a big score as he thumped nine fours in a fluent 50.

Yet that stay was unexpectedly cut short when he missed a yorker from Colin de Grandhomme (2/43).

JP Duminy once again flattered to deceive as he top-edged a pull to fine leg.

It would seem his decision to take a break and miss the IPL could be a wise one.

With Du Plessis looking good on 33 and Temba Bavuma in fine form, the Proteas will hope for a Wellington-like recovery.