Roaring Rabada rips through Aussies to put Proteas in control

The gifted young quick illustrates his class again but it took a mid-day rethink for the hosts to tame the visitors in PE. 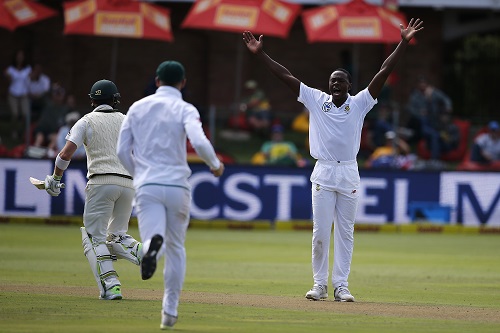 Kagiso Rabada produced a spell of sustained hostility, pace and skill on either side of the tea interval to give the Proteas a strong start on the opening day of the second Sunfoil Test match at St. George’s Park on Friday.

The Proteas, needing victory to square the four-match series, will have been delighted to dismiss Australia for 243 inside the first day’s play and then reply with 39 for the loss of Aiden Markram’s wicket by the close of play.

Australia, having won the toss, looked comfortably placed on a lively surface after David Warner and Cameron Bancroft put on 98 for the first wicket and Steve Smith and Shaun Marsh a further 44 for the fourth.

But everything changed when Rabada returned to the attack. After bowling one over from the Duckpond End he switched to the Park Drive end and, starting with the key wicket of Smith, he ran through most of the Australian middle and lower order.

At one stage he had 4/8 off 7 balls and had the chance to take a hat trick after dismissing Mitchell Marsh and Pat Cummins with successful balls.

It was Rabada’s eighth five-wicket haul in only his 28th Test match and his second against Australia.

He was well backed up by Vernon Philander and Lungi Ngidi, who was preferred to Morne Morkel in the only change to the Proteas side, who took the other 5 wickets between them.

This enabled the Proteas to take 5/72 in the second session and 4/73 in the final one. The only thing that will have disappointed them would have been the fact that the Australian tail was again able to wag to some extent with the last 3 wickets contributing the 73 runs that were scored after the tea interval.

For good measure Rabada also did well as night watchman to get his side through the final 20 minutes without further loss.