Proteas clueless against spin in ending ODIs on low note 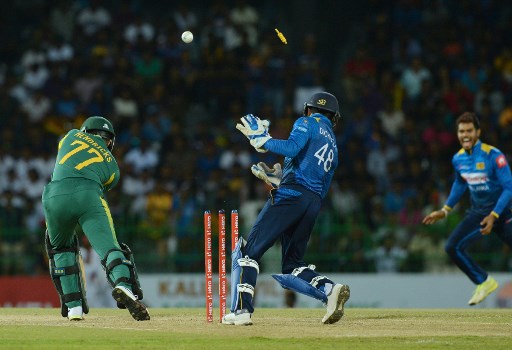 Following two weeks of serenity, the Proteas relived the haunting that was the Test series against Sri Lanka as they lost Sunday’s fifth and final ODI by 178 runs in Colombo.

While they still walk away with a 3-2 series win, there’ll be a distinct sense of unease over this performance.

Chasing 300 on the dot, South Africa were simply clueless in dealing with the spin of Akila Dananjaya, who claimed figures of 6/29.

The strength of the 24-year-old tweaker is that he can turn the balls both ways, a skill beyond the comprehension – it seemed – of an inexperienced batting order.

Ironically, the slide started with pace after Hashim Amla was cleaned up by a peach of a delivery by Sri Lankan skipper Suranga Lakmal, which seamed away late.

But from there it was all about Danajaya.

Aiden Markram (20), back in the side after being dropped for two games, looked a million bucks against Lakmal, cracking all five of his boundaries against him.

However, he didn’t read Dananjaya’s googly and tamely gave the bowler a return catch.

It was the same with Reeza Hendricks (0) and Heinrich Klaasen, who were dismissed by the same delivery.

The Proteas will really need to address this weakness for future assignments.

In the middle of all the carnage, stand-in skipper Quinton de Kock attacked gamely in making 54 off 57 yet he was also eventually dislodged by a slider from the irrepressible Dananjaya.

In hindsight, the Proteas probably did have a feeling spin might become a problem for them on a slow pitch.

Keshav Maharaj, retained ahead of Tabraiz Shamsi, was excellent in taking 1/32 from his 10 overs.

The seamers though, with the exception of Kagiso Rabada, were too inconsistent as Sri Lanka did well to reach 299/8.

Captain Angelo Mathews was the mainstay with a skilful, unbeaten 97.

He deserved a century but it wasn’t to be.