Amateur hour(s) at the Wanderers

Don't read this if you expected classy, skillful cricket between the Proteas and Pakistan on Saturday... 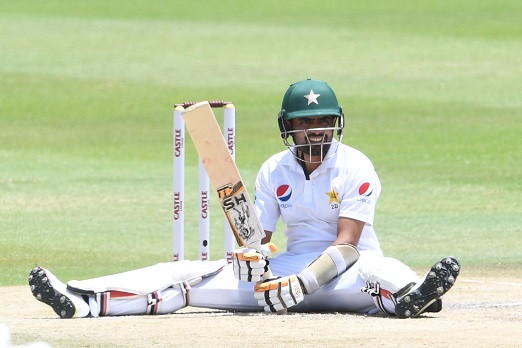 Pakistan captain Babar Azam and his team have been issued a 'final warning' after breaching Covid protocols in New Zealand. Picture: Getty Images

On paper, the third and final Test between the Proteas and Pakistan would seem fairly innocuous.

South Africa made an under-par 262 against a decent visiting attack, but were saved by their own vicious four-pronged pace attack in dismissing their wounded opponents for 185.

However, paper (or screen in this case) won’t reveal how poor some of the cricket on Saturday’s second day was.

Look away if you’re a fan with high standards!

In the build-up to the second Test at Newlands, Proteas regular skipper Faf du Plessis quipped that he’d “warned” new cap Zubayr Hamza to be ready for any catches that might come his way (Hamza was 12th man in that match).

Du Plessis even joked that he asked the 23-year-old whether he would be willing to field in the slips, usually the reserved for the big dogs in a team.

After the first hour on Saturday, his stand-in, Dean Elgar, would’ve wished he’d put the 23-year-old debutant in the slip cordon.

Because what happened in that spot on the field was, simply put, chaos.

Four dropped catches within the space of eight overs!

It starts with Temba Bavuma, who’s granted a reasonably simple offering at about shin height at gully.

But the pace surprises him and the hands are hard.

Next up, Dale Steyn bowls a lovely delivery to Imam-ul-Haq, setting up Elgar for a routine catch at second slip.

Theunis de Bruyn, however, feels he needs to chip in from third slip – diving in front of his captain, only getting a thumb to the ball and distracting Elgar enough for the catch to be spilled.

Steyn delivers an outswinger, tempting the dogged nightwatchman Mohammad Abbas to have nibble.

The ball is comfortable for Hashim Amla at first slip, yet Quinton de Kock decides he can possibly do better than De Bruyn and also jumps in front of a teammate.

But it doesn’t end there.

Kagiso Rabada induces another edge, De Kock goes with the one hand and accompanies it with a spectacular dive.

There’s no time for groans though as there’s a run out chance, which leads to…

Imam and Abbas believe a scramble for a run is on, but Imam isn’t looking at his partner.

Abbas has to scurry back as he’s very much in trouble.

The cordon flicks the ball to Rabada, who’s still mid-pitch, and launches the type of rocket throw that made it seem him and Duanne Olivier at mid-off had just had a lover’s quarrel.

Miscommunication is at the order of the day the very next ball as the Proteas have another run out opportunity.

Rabada, possibly regretful that he tried to crack Olivier’s knees the previous delivery, ambles to the non-striker’s end instead of getting back as quickly as possible and is really in no position to break the stumps.

About 13 overs later, Sarfraz Ahmed pushes a single to cover and is surprised by the nimble reaction of the fielder, who let’s rip.

Rabada struggles to back up and the ball races to the fence for five runs.

Oh, but it doesn’t end there.

Steyn storms in from mid-off to lend a hand and aims for the non-strikers end.

It’s a bullet throw, but it (unsurprisingly) misses and a full length dive by the backup fielder proves futile.

Five more runs and Steyn, who’d already left the field previously, winces on the ground as the contemplates the sound logic of throwing so intensely with sore shoulder.

But what would amateur hour be without a Pakistani hand?

Sarfraz and the impressive Babar Azam are very much feasting on the Proteas attack.

The Pakistan captain counterattacks to such an extent that he overtakes Babar for his fifty – at one stage he was 21 when Babar had 47.

It comes of just 38 deliveries and the hosts are rattled.

Rabada though doesn’t relent and bowls on short of a length.

He goes horizontal with the bat.

Four balls later, Babar seems to forget (again) that the pacy Olivier isn’t easy to hook or pull, especially with a fine leg in place.

He falls into the trap.

The cherry on top though arrives the very next delivery.

Faheem Ashraf is given a well-directed bouncer, which he really should just duck under – it’s his first ball after all.

He goes for the pull.