The mercurial pair play starring roles on a day where Pakistan showed some guts with the bat in the third and final Test. 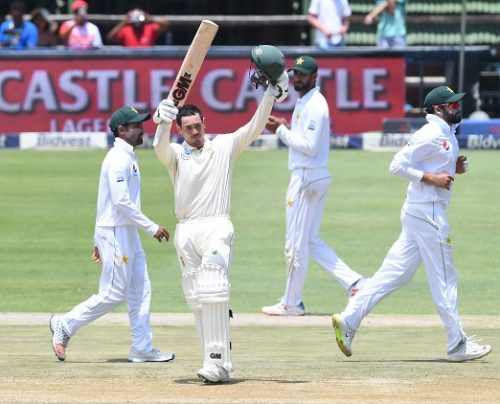 Quinton de Kock of the Proteas celebrates his 100 runs during day 3 of the 3rd Castle Lager Test match between South Africa and Pakistan at Bidvest Wanderers Stadium on January 13, 2018 in Johannesburg, South Africa. (Photo by Lee Warren/Gallo Images)

Two men with points to prove duly delivered as the Proteas made steady strides towards as Test series whitewash over Pakistan on Sunday.

Set a target of 381, the visitors ended the day solidly on 152/3 though it’s not a winning platform (yet) on a pitch that’s expected to deteriorate.

However, much of the day belonged to Quinton de Kock and Dale Steyn.

For the most part it was South Africa’s wicketkeeper-batsman that stole the show with a magnificent 129 off just 138 deliveries.

Not only was it arguably the most mature innings De Kock’s played in the pinnacle form of the game, it also re-established him as a premier scorer of runs.

Indeed, it was difficult to understand why the left-hander threw an emotional “yes! punch” in the middle of the pitch after he pushed Faheem Ashraf down the ground for the boundary that brought up his fourth Test ton.

You have to go back more than 24 months for De Kock’s previous century – against Sri Lanka at Newlands.

It was a knock that suggested he was heading into hundred-making nirvana.

Yet difficult series after that saw him only score six half-century in his next 38 innings.

This was the type of classy knock that suggests the drought is over.

De Kock was superbly supported by veteran Hashim Amla, who was rock-solid in making 71 and a main contributor in South Africa’s 303.

Pakistan showed good intent during the afternoon as the Proteas bowlers couldn’t quite hit their straps.

The exception was Steyn.

While South Africa’s leading Test wicket-taker hasn’t missed out on victims in this series, there have been suggestions that he hasn’t quite been at his best.

It didn’t help that he picked up shoulder trouble in Pakistan’s first innings.

Given some rest, Steyn showed his enduring class in claiming 2/37.

It was his change in line to the left-handed pair of Imam-ul-Haq (35) and Shan Masood (37) that saw both fall to him caught behind and keep the home side in control.

But the rewards were few for the rest of the day.