The openers shared an outstanding partnership of 225 in 36 overs for the first wicket. 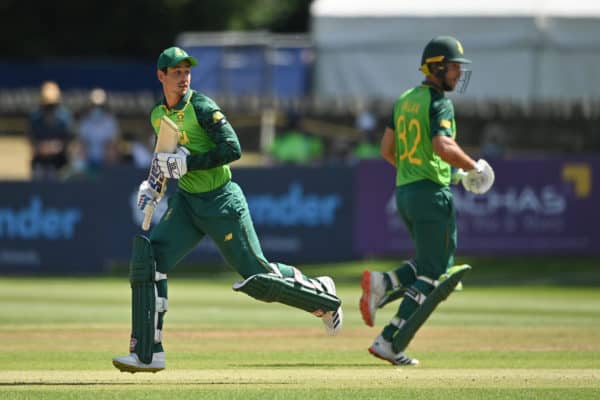 The Proteas came right when they needed to, centuries by openers Janneman Malan and Quinton de Kock leading them to a comfortable 70-run win over Ireland at Malahide in Dublin on Friday, but it meant they had to settle for the mediocre outcome of sharing the series with the 12th-ranked team.

Putting their shock midweek defeat behind them, South Africa won the toss and this time elected to bat first, wanting to land the first punch and dominate from the outset. They certainly did that as Malan and De Kock shared an outstanding opening partnership of 225 in 36 overs.

De Kock was in majestic form, unfazed by anything the Irish could throw at him, and his superb 120 off 91 balls was the sort of quality innings where the left-hander looked in complete control throughout, striking 11 fours and five sixes.

De Kock eventually fell to the off-spin of Simi Singh when he just failed to clear the midwicket boundary, Mark Adair taking the catch with his heels lifted to avoid touching the line.

But Malan powered on to a magnificent 177 not out off 169 deliveries, hammering 16 fours and six sixes. Who De Kock’s opening partner should be in ODIs would now appear to be settled as Malan has collected 483 runs in his six ODI innings at a phenomenal average of 120.75.  He has two centuries and his strike-rate is 94.33. That should be sufficient for the 25-year-old to have cemented his place in the team.

Malan’s unbeaten 177 was the fourth highest individual score for the Proteas in ODI cricket and, with Rassie van der Dussen adding 30 off 28 balls, they were able to post a pleasing 346 for four.

In the field, South Africa snuck in left-arm spinner Keshav Maharaj at the start of the innings and he had both openers, Paul Stirling (11) and Andy Balbirnie (7), well-taken at slip by Malan.

Lizaad Williams then had the delight of having Andy McBrine caught behind for 9 with his first ball in ODI cricket as Ireland slumped to 27 for three inside the first eight overs.

The run-rate only really arose from its slumber when former SA U19 all-rounder Curtis Campher, with a run-a-ball 54, and Singh slapped the ball around in a seventh-wicket stand of 104.

South Africa once again finished the innings poorly with both ball and in the field, and Singh took the opportunity to notch a maiden century, finishing with a dazzling 100 not out off 91 balls.

Tabraiz Shamsi continued to have spin aficionados purring with delight as he took three for 46 in his 10 overs, while there was some pleasing success for all-rounder Andile Phehlukwayo, whose surprise packet of deliveries brought him three for 56 in 10 as Ireland were eventually all out for 276.