The South Africans wrapped up the win without losing a wicket in their chase of 121. 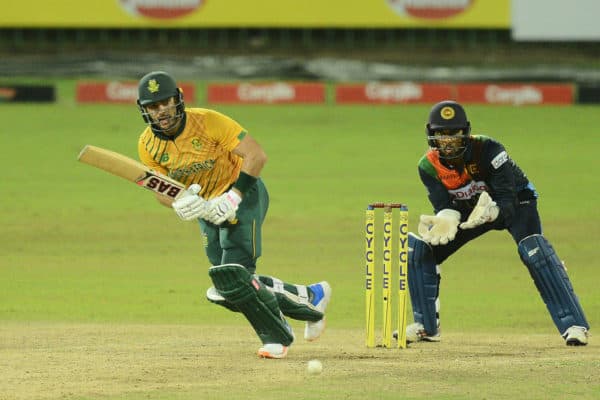 Proteas opener Reeza Hendricks scored a half century on the way to helping the team beat Sri Lanka in the third T20 in Colombo on Tuesday. Picture: Isuru Sameera/Gallo Images

South Africa’s Proteas recorded a third straight T20 International win against Sri Lanka in Colombo on Tuesday to bag the series without suffering a defeat.

While the visitors’ spinners have grabbed the headlines in recent weeks, it was the batsmen who really came good on Tuesday, with both openers scoring half centuries to lead the team to a comfortable 10-wicket win.

Chasing a modest 121 for victory, Quinton de Kock (59 from 46 balls) and Reeza Hendricks (56 from 42 balls) batted superbly to reach the target with 32 balls to spare.

The series win will give the South African squad plenty of confidence ahead of the World Cup in Oman and the UAE, which is now just a few weeks away.

Earlier the South Africans bowled excellently and never allowed their hosts to settle or get into any kind of rhythm. They also picked up wickets at regular intervals, never allowing the Sri Lankans to get any sort of partnerships going.

Four of the eight wickets to fall were still taken by the spinners, but on this occasion the world’s top-ranked bowler, Tabraiz Shamsi, failed to pick up any wickets to add to his ever-growing collection of scalps.

Captain Keshav Maharaj took one for 14 in four overs, Bjorn Fortuin claimed two for 21 in four and (part-timer?) Aiden Markram took one for four in two overs.

Kagiso Rabada got his team off to the perfect start when in the second over he caught and bowled Avishka Fernando and later bowled Bhanuka Rajapaksa with a beautiful delivery that swung in late.

After 10 overs Sri Lanka were 62 for four and then only marginally recovered. Opener Kusal Perera with 39 and some late blows by Chamika Karunaratne (24 not out) got the home team to a score that would have felt was perhaps defendable.