‘This is just the start,’ says Babar as Pakistan celebrate

Their victory broke Pakistan's overall jinx of 12 World Cup games without a victory against India since 1992. 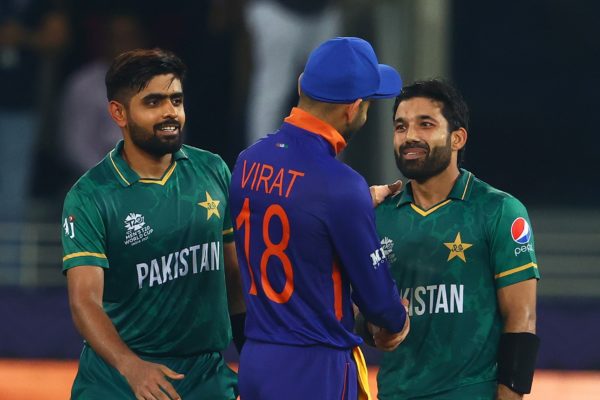 Pakistan captain Babar Azam said a first World Cup victory over India was “just the start” as his team basked in the joy of a 10-wicket triumph at the T20 global showpiece on Sunday.

Babar Azam scored a 52-ball 68 not out while fellow opener Mohammad Rizwan hit an undefeated 55-ball 79 as Pakistan achieved their first 10-wicket win in all Twenty20 internationals by comfortably chasing down their target of 152.

“This is just the start, we have confidence to build on it now,” said Babar after the opening win in the round-robin Super 12 stage.

“That will remain with us. The pressure on us wasn’t that much — we weren’t thinking of the record against India at all.”

Strike bowler Shaheen Shah Afridi got Pakistan off to a flying start.

He dismissed dangerous opener Rohit Sharma with the fourth delivery of the match for a first-ball duck and then got the in-form KL Rahul (three) and India skipper Virat Kohli (57) in an incisive 3-31 spell off his four overs.

“We executed our plans well and the early wickets were very helpful,” added Babar.

“Shaheen’s wickets gave us a lot of confidence and the spinners dominated as well.”

Victory also broke Pakistan’s overall jinx of 12 World Cup games (seven 50-over World Cup matches as well) without a victory against India since 1992.

“Shaheen got us wickets at the top of the order and that proved to be the turning point,” said Rizwan who said the victory was a gift to the nation.

“Congratulations to the whole of Pakistan and all our people as we were all waiting for this win,” said Rizwan.

“This was my first game against India, so it’s a good thing for me.

“I used to watch all the Indo-Pak matches on television and used to pinpoint where we made mistakes.

“But today’s game was great and after Shaheen got those wickets we were confident we would win.”

Shaheen said the win was the perfect start to the tournament where the top two teams in each Super 12 group make the semi-finals.

“We knew that we have to win this game as we had never won a World Cup match against India, so it’s very heartening and welcoming,” he said.

Shaheen said he had planned to bring the ball in as the dry pitch was offering some swing.

“I had a plan against Rohit and that was to bring the ball in,” said Shaheen. “It swung and I got him leg-before wicket and that was the start we needed.”

Indian skipper Kohli scored a valiant 57 before he was caught behind off Shaheen in the 19th over.

“Kohli is a world-class batsman so he survived that first spell but I know that he bats like Babar and I bowled to him like I bowl against Babar in the nets,” explained Shaheen.

Pakistan next play New Zealand in Sharjah on Tuesday.