‘We need to focus on matters on the field,’ says Bavuma after ‘toughest day’

"I would hope we are judged by how well we hit or bowl the ball and not by what causes we support or how we do it." 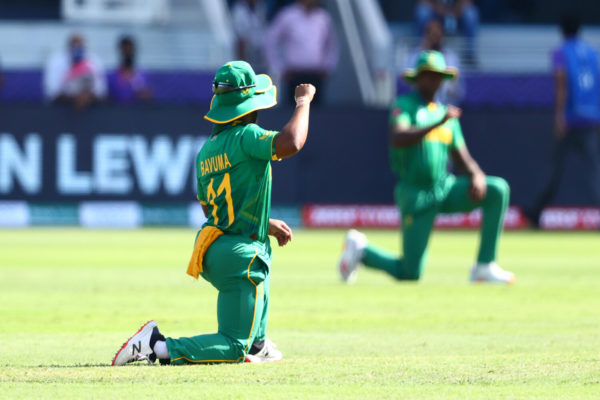 Captain Temba Bavuma of South Africa takes the knee ahead of the match against the West Indies at Dubai International Stadium on Tuesday. The Proteas won the game on a drama-filled day which saw Quinton de Kock pull out of the side. Picture: Francois Nel/Getty Images

Proteas skipper Temba Bavuma described the events of Tuesday as one of the toughest he has had to deal with as a captain.

This, after the team was rocked on the eve of their crucial T20 World Cup match against the West Indies in Dubai following the CSA Board’s directive that all players must take the knee in support of BLM and the subsequent withdrawal from the side of key batsman Quinton de Kock because he chose not to do so.

It took South Africa a good 10 overs to get their mental focus on track, in which time Evin Lewis had given the West Indies a blazing start, but the Proteas deserve enormous credit for the clinical display they produced thereafter in winning by eight wickets with 10 balls to spare.

“It was one of the toughest days I’ve had as the captain,” said Bavuma. “I’m just ecstatic that we were able to get into the right frame of mind and play the way we did against a powerhouse West Indies team.

“We should not take this win lightly and I’m just very glad that we’ve now got our campaign started. We knew our batting in particular needed to improve and the way we were so clinical with the bat was a big step in the right direction.

“The bowlers have been fantastic the last while and they again showed their skill and class. It was a good day in the field in the end. What happened with the directive and Quinny pulling out was not ideal, but they were the cards we were dealt as a team and it was good that the guys were able to represent the country as well as they did today.”

While losing De Kock is a major blow – and it could well be for the rest of the tournament – Bavuma expressed the hope that the team, brought closer together by hardship, will grow more and more as a unit in their remaining group matches against Sri Lanka, Bangladesh and England.

“It’s going to be a tough couple of days for the group as we try and find out about the decisions that have been made, but we have to respect those whether we agree or not,” Bavuma said.

“Unfortunately the team still has to get the job done and it’s important to find a way to get into the right mental space. And the tournament is obviously only going to get tougher.

“So it’s important that we stay even more together as a team. Hopefully we can now create some momentum. But we need to focus on matters on the field.

“We will only lose energy as a team if we focus on things on the outside, and I would hope we are judged by how well we hit or bowl the ball and not by what causes we support or how we do it.

“We need to have our eyes on the ball,” Bavuma said.