While the cricketing world eagerly awaits De Kock’s explanation for the stance he took, the fallout has continued. 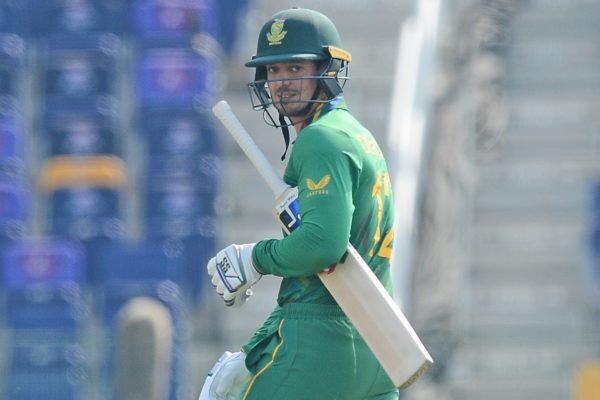 Quinton de Kock has created widespread controversy after his decision not to take a knee at the T20 World Cup. Picture: Gallo Images

The players association gets involved in Proteas matters when the team as a whole is affected by an issue, and that’s why the South African Cricketers’ Association has offered its support to the squad over the last 24 hours in the wake of the Quinton de Kock ‘taking a knee’ controversy, SACA CEO Andrew Breetzke said on Wednesday.

De Kock withdrew from the Proteas’ T20 World Cup match against the West Indies on Tuesday, a couple of hours before the start, after Cricket South Africa (CSA) issued a directive on the morning of the game instructing all players to take a knee in support of Black Lives Matter.

While CSA was awaiting a report from team management before deciding on what action to take, and De Kock spent Wednesday with agent Dave Rundle crafting a statement to explain his actions, SACA had been actively involved in protecting the interests of the team as a whole.

ALSO READ: De Kock ‘still a part of Proteas team and has not been sent home’

“It’s a complex and complicated scenario and our focus has been on supporting the team over the last 24 hours, but we’ve engaged with Quinton a lot too,” Breetzke said on Wednesday.

“The timing of CSA’s directive has been destructive to the team environment at the World Cup. While SACA would have preferred a unified team stance on taking the knee, the players’ stance has not changed in 12 months.

“So this directive by the CSA board should have been made before the World Cup and not during the tournament.”

Although the players had not been able to come up with a unified response to supporting BLM, Breetzke felt they had worked hard to build a team environment.

“This current Proteas team has had more culture camps and discussions about diversity under Temba Bavuma than any other Proteas side.”

While the cricketing world eagerly awaited De Kock’s explanation for the stance he took, the fallout continued with unconfirmed reports from India saying his IPL franchise, the Mumbai Indians, would not be re-engaging his services at the next auction. But after a fairly average last season for them, they might have been looking to move on anyway from a big earner with a reported $500 000 contract.

The Big Bash League in Australia, however, had already put out the welcome mat for De Kock should he no longer be playing for the Proteas this summer.

“We encourage our players to think about the issues and express their views as they see appropriate,” Cricket Victoria CEO Nick Cummins told The Daily Telegraph in Australia.

“We would certainly be interested in a player of his calibre to come to the BBL. It would be great for the competition.”