'I request all the fans to stay cool. What happened in the 2019 match should not have happened,' pleads the Afghanistan spinner. 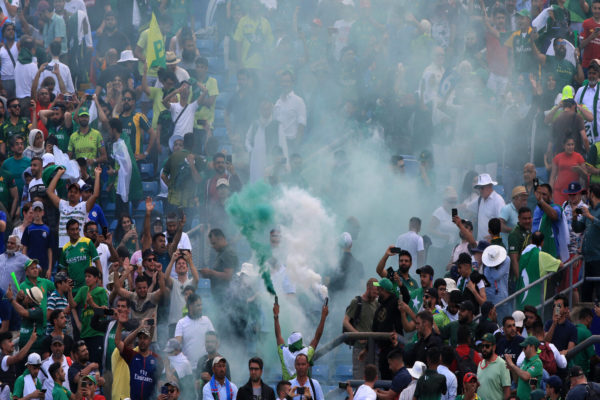 Spectators letting off flares after the 2019 Cricket World Cup group stage match between Pakistan and Afghanistan at Headingley in Leeds on June 29, 2019. Picture: Lindsey Parnaby / AFP

Rashid Khan has pleaded with Afghanistan and Pakistan fans to behave when the two neighbours meet in the T20 World Cup on Friday after a  match in England two years ago was scarred by fighting and a pitch invasion.

Afghanistan’s star spinner Rashid played in that 50-over World Cup game at a packed Headingley in Leeds in 2019.

His side suffered an agonising defeat but the result was overshadowed by violence and scuffles inside and outside the stadium.

Players needed security escorts off the pitch as fans poured out of the terraces.

Friday’s game in Dubai could be tense as both teams are undefeated and chasing semi-final places.

A weekend capacity crowd is expected from amongst the huge expatriate population of both nations who live and work in the Gulf.

“Definitely it’s always a good game against Pakistan, but this should remain as a game,” Rashid said Thursday.

“I request all the fans to stay cool and calm and just enjoy the game. What happened in the 2019 match should not have happened.”

Rashid claimed four wickets and fellow spinner Mujeeb Ur Rahman took five as Afghanistan started their T20 World Cup in style, bowling out Scotland for just 60 in reply to their mammoth 190-4.

However, the Afghanistan team came into the tournament under the threat of a ban due to the ruling Taliban government’s hardline stance on women’s sport.

The International Cricket Council (ICC) — which makes it mandatory for all member countries to have men’s and women’s teams — said it has been monitoring the situation and will discuss the matter in its meeting in Dubai next month.

Afghanistan cricket chief Azizullah Fazli told AFP at the start of the tournament: “Our government is streamlining things and women’s cricket will also be streamlined.”

Rashid said that the squad is trying just to focus on the tournament.

“We have only the World Cup in mind, we’re playing five games and we need to win three games,” said the 23-year-old.

“We shouldn’t think about it, we don’t want extra pressure on us. As a team, we’re just focusing on this World Cup to get better and better.”

Afghanistan smashed 11 sixes and 13 boundaries in their rout of Scotland in Sharjah.

But Rashid said hitting aggressive shots is not the team’s only objective.

“To be honest, we don’t have that kind of mindset, like, you have to focus on hitting so many sixes,” he said.

“But you have to adjust yourself with the wicket.

“I think we need to play good cricket. It’s not about getting too many sixes. These grounds are very hard to hit sixes. The wickets are not as good to hit the sixes.”