The South Africans produced a quality final group outing, but it was not enough for them to advance to the semi-finals. 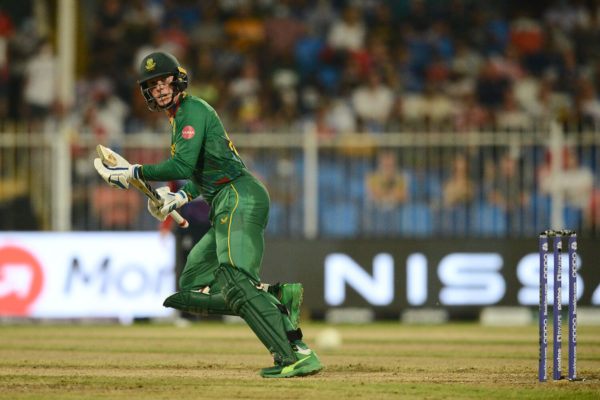 Rassie van der Dussen was one of the Proteas' big stars in the T20 World Cup win against England in Sharjah on Saturday. Picture: Isuru Sameera Peiris/Gallo Images

South Africa were left to brood over their poor batting in their opening game against Australia as they beat previously unbeaten England by 10 runs, but were knocked out of the T20 World Cup in Sharjah on Saturday night on net run-rate.

Losing an important toss and being sent in to bat first, South Africa’s batsmen produced a superb display, their best of the tournament, to hammer 189/2 in their 20 overs.

It means they had to restrict England to less than 131 in order to qualify for the semi-finals in front of Australia, who had earlier cruised past the West Indies by eight wickets with 22 balls to spare. Although they failed to do that, they showed impressive calm in the closing overs to limit England to 179/8.

England’s powerhouse batting line-up kept a cracking pace throughout and were not helped by Jason Roy having to retire hurt on 20.

Under pressure, where the Proteas did not err however was in still picking up wickets. Anrich Nortje bowled well and removed dangerman Jos Buttler for 26 off 15 balls, before Tabraiz Shamsi (4-0-24-2) struck two big blows by dismissing Moeen Ali (37), the ball after being hit for a huge six, and trapping Jonny Bairstow lbw for 1.

Dawid Malan (33 off 26) and Liam Livingstone (28 off 17) kept England very much in the hunt, but both were winkled out by Dwaine Pretorius.

England needed 14 off the last over and Kagiso Rabada had to bowl it, having travelled for 45 runs in his three overs up till then.

It’s not as if Rabada strew the ball all over the place, but rather that he bowled entirely the wrong length on a pitch with low bounce – instead of hitting the deck hard back-of-a-length, he bowled far too full and was belted for five fours and three sixes. For a bowler of his experience and skill, it was baffling and infuriating.

But pulling his length back and using variations in pace worked an absolute treat for him in the final over, as he took a hat-trick, Chris Woakes (7), Eoin Morgan (17) and Chris Jordan (0) all falling to catches in the deep. The villain turned match-winner.

The Proteas can take enormous heart from their batting display against such a strong bowling attack, especially considering how much the batting has improved in the last year.

Quinton de Kock again gave a tantalising glimpse of his abilities as he scored 34 off 27 balls before holing out at long-on off leg-spinner Adil Rashid.

He had given South Africa a solid platform though, departing on 86/2 in the 12th over.

Rassie van der Dussen showed how effectively he can change gears, both helping to set up the innings and then accelerating brilliantly at the death as he struck a marvellous 94 not out off 60 balls.

Aiden Markram showed he can be a highly-effective finisher as he lashed 52 not out off just 25 deliveries, including four sixes. His fiery strokeplay means he now has two of the five fastest half-centuries in the tournament.

Van der Dussen and Markram added 103 for the third wicket in just 8.4 overs and South Africa’s top-order can certainly feel they did more than what was expected, setting up an impressive victory and ensuring the Proteas depart the tournament on a high.