India are expected to fly to South Africa for a full series, but the new Covid variant might put plans on hold. 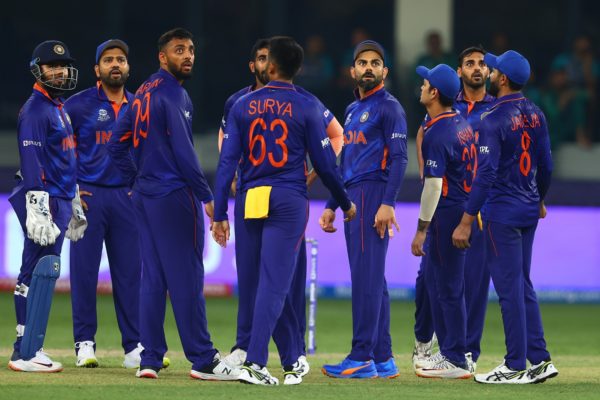 Captain Virat Kohli and his India teammates during their match against Pakistan at the recent T20 World Cup. Picture: Getty Images

India skipper Virat Kohli said Thursday his side were seeking clarity about the upcoming tour of South Africa, which could still be in doubt over the spread of the Omicron Covid variant.

Kohli returns for the second Test against New Zealand in Mumbai starting Friday after he stepped down as Twenty20 captain at the end of India’s World Cup campaign and took a short break.

New Zealand hung on to a draw in the opening Test of the two-match series.

India are expected to fly to South Africa for a full series, including three Tests from December 17, but the highly infectious new Covid variant might put plans on hold.

“There are players who are not part of this group right now who will be entering quarantine to join the team,” Kohli told reporters a day out from the Mumbai Test.

“Those kinds of things you want to seek clarity as soon as possible.”

A tour by India is easily the biggest money-spinner for South African cricket and is believed to be worth hundreds of millions of rands.

On Tuesday the South African government had pledged to take all precautions necessary to keep players safe and praised the “solidarity” of India’s cricketers in choosing to continue with the tour.

But the Board of Control for Cricket in India has also said it will await a government nod on the Proteas tour before making a final decision.

Kohli insisted their focus is on the final Test while staying connected with the board over the Proteas trip.

“At the end of the day we understand, our focus from the Test match will not shift regardless,” he said.

“We have been talking to the board and we are pretty sure within a day or two we will have absolute clarity as to what is going on.

“We need to be realistic about things as well, we cannot just ignore the things that potentially could put you in a confusing place and no one wants to be there.”

Top-ranked New Zealand, who beat India to win the inaugural World Test Championship in June, have never won a Test series in India and last won a five-day game there in 1988, also in Mumbai.

Ajinkya Rahane stood in as captain of the home side that witnessed a frustrating last-wicket partnership in a thrilling last session of the opening match’s fifth day.

But Rahane and Cheteshwar Pujara’s lack of form with the bat and Shreyas Iyer’s prolific scoring — 105 and 65 — in his debut test leave India with a selection headache in Mumbai, with rain over the past two days.

Kohli said wicketkeeper-batsman Wriddhiman Saha had recovered from a neck spasm he suffered in the first Test but would not be drawn on the line-up.

“Wriddhiman Saha as of now is fit and has recovered from his niggle,” said Kohli.

“We will discuss the combination with the weather changes in mind. Whichever combination we discuss as a group, that’s what we usually come in with on the field.”

He said any players who failed to make the XI at Wankhede Stadium will understand that the decision is based on team strategy.

“So you have to communicate well, speak to the individual and explain things to them properly. And mostly it’s been combination-based whenever we have done changes in the past.”

A stubborn last-wicket stand between Indian-origin players Rachin Ravindra and Ajaz Patel denied India a win at Kanpur after the pair batted for 52 balls in New Zealand’s 165-9 while chasing 284.