South Africa were not helped by the absence of pace bowlers Anrich Nortje and Duanne Olivier. 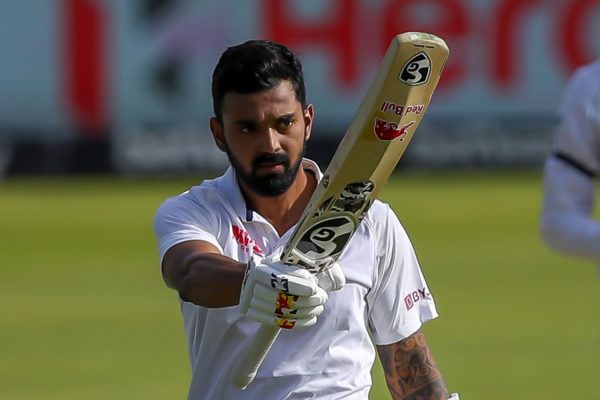 Lokesh Rahul celebrates his century on day one of the first Test between South Africa and India. Picture: Gordon Arons/Gallo Images

Opening batsman Lokesh Rahul was the dominant figure on the opening day of the first Test between South Africa and India in Centurion on Sunday – whether it was in partnership with Mayank Agarwal, Virat Kohli or Ajinkya Rahane – with his unbeaten century steering the tourists to 272/3 at stumps.

Rahul went to stumps on 122 not out, showing great patience at the start as he took 21 deliveries to get off the mark, before gradually asserting himself and establishing his command over the bowling.

It was the sort of statement innings captain Kohli would have desired on the opening day of the series.

Having won the toss, India made the right decision to bat first, even though it felt like a bowler’s morning: cool temperatures and a greenish tinge to the pitch.

But an underdone Proteas attack was either too full or too straight and Rahul and Agarwal batted brilliantly to put on 117 for the first wicket.

Lungi Ngidi, whose readiness for this Test was in doubt given he had bowled only seven competitive overs since July, made an understandably uncertain start with the new ball. But after lunch he had the masterstroke of using off-cutters on a dampish pitch and removed Agarwal (60) and Cheteshwar Pujara (0) with successive balls.

Agarwal was struck above the roll and the lbw appeal was turned down, but South Africa reviewed and DRS showed the delivery to be hitting the top of leg stump. Agarwal clearly did not agree, and many others were in agreement with umpire Marais Erasmus’s on-field decision of not out.

That disappointment turned to shock for India as Pujara inside-edged his first ball on to his thigh-pad, with Keegan Petersen moving sharply from backward short-leg to take the catch.

But Kohli helped restore the equilibrium as he and Rahul added 82 for the third wicket.

Kohli looked in fine touch as he went to 35, before Ngidi once again came up with a cunning plan to unseat the Indian captain. It was a speculative full and wide away-swinger, but Kohli went for the drive and edged it to first slip.

With the new ball less than a dozen overs away, Rahane came to the crease. The 33-year-old’s place in the middle-order had been in serious doubt, but he played with no sense of hesitancy or feeling pressure as he strode to 40 not out by the close, adding 73 for the fourth wicket with Rahul.

South Africa were not helped by the absence of Anrich Nortje nor the recent bout of Covid suffered by Duanne Olivier. According to sources close to the team, team management were not convinced Olivier’s bowling loads had been enough to get him through a five-day Test.

Young Marco Jansen came in for his debut and endured a tough day with figures of 17-4-61-0.

But the Proteas would have been thrilled with Ngidi’s contribution on Sunday, as he ended with three for 45 in 17 overs, and he should only get better in this series.